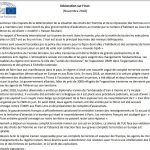 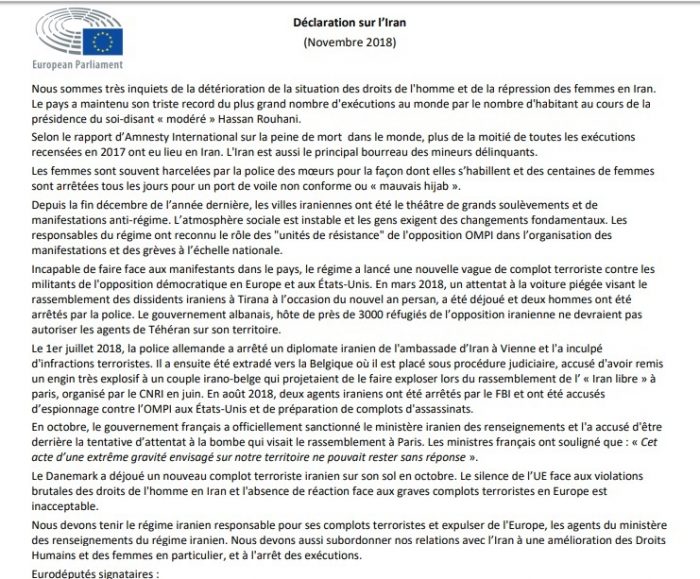 150 Members of the European Parliament demand the EU states to take necessary measures to prevent more terrorist activities by the Iranian regime.

The statement called attention to the regime’s disturbing use of the death penalty. “The country has maintained the highest number of executions in the world per capita during the presidency of the so-called ‘moderate’ Hassan Rouhani,” the statement read. “According to Amnesty International’s Global Report on the Death Penalty, more than half of all recorded executions in 2017 took place in Iran. It is also the leading executioner of underage offenders.”

The statement also expressed concern for the treatment of women in Iran, saying, “Women are frequently harassed by morality police for the way they dress, and hundreds of women are arrested every day for improper veiling or ‘bad hijab.’”

The MEPS noted that major uprisings and anti-regime protests have taken place in Iran over the past year and continue to occur. The people are demanding fundamental change. According to the statement, “The regime’s officials have acknowledged the role of ‘resistance units’ of the opposition PMOI [MEK] in organizing protests and nationwide strikes.

“Unable to defeat the protesters at home, the regime launched a new wave of terrorism against the democratic opposition activists in Europe and in the United States.”

The statement goes on to describe the various terrorist plots attempted by the Iranian regime over the past year. “In March 2018, a car-bomb plot targeting the Persian New Year gathering of Iranian dissidents in Tirana was foiled, and two men were arrested by the police,” the statement reads.

The statement follows with a summary of the regime’s terrorist plots against the MEK in France, the United States, and Denmark:

“On 1 July 2018, German police arrested an Iranian diplomat from the embassy in Vienna and charged him with terrorist offenses. He was later extradited to Belgium, and he is on trial accused of handing over a highly-explosive device to an Iranian-Belgian couple who were planning to bomb the opposition NCRI’s Free Iran gathering in Paris in June.

In August 2018, two Iranian agents were arrested by the FBI and charged with spying on the PMOI [MEK]  in the US and preparing assassination plots.

“In October, the French government officially sanctioned Iran’s Ministry of Intelligence and accused it of being behind the Paris bomb plot. French ministers stressed: ‘This extremely serious act, which was intended to take place on our soil, cannot go without a response.’

“Denmark foiled a new Iranian terror plot on its soil in October. The E.U.’s silence in the face of brutal human rights violations in Iran and lack of any response to the serious terror plots in Europe is unacceptable.”

The MEPs conclude the statement with a call to hold the regime accountable for its terrorist plots and to expel all regime intelligence agents from Europe. They also state that all relations with Iran should be conditioned upon “an improvement of human rights and women’s rights, and a halt to executions.”

Gérard Deprez, Chair of Friends of a Free Iran, emphasized this in regard to Iran: “Human rights in Iran cannot be compromised or marginalized on the excuse of political considerations, trade or the nuclear deal. Any expansion of political and economic relations with Iran must be conditional to a clear progress on human rights, women’s rights and a halt to executions.”