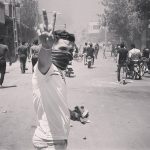 An Unstoppable Force: the Rising Tide of Iran’s Protest Movement 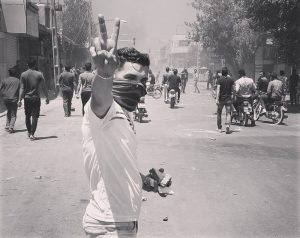 A young Iran protester shows victory sign, while joining fellow protesters to push back on repressive IRGC forces in Isfahan

His article comes at a prominent moment. The residents of Isfahan have joined the nation’s truck drivers in their protests, and protests in Tehran continue to rage.

The economy is in sharp decline as decades of mismanagement has caused rampant currency inflation. On top of a spiralling economy, Iranian’s have to contend with water shortages and price increases for basic essentials like food and drink.

Evansky describes how in these uncertain times, the Iranian protest movement is rapidly expanding. The People’s Mujahedin Organisation of Iran (MEK) and their activists have published footage on social media of the protests in Iran. Tehran’s residents can be heard chanting “the mullahs must get lost”.

Similar images have been released from Arak. Protestors there are using the slogan, “no to Gaza, no to Lebanon, my life for Iran” (referring to the mullahs use of Iranian finances to fund foreign conflicts and terrorist organizations abroad while Iran’s own population goes hungry and thirsty).

In his article, Evansky analyzed the slogans used by the Iranian population during the protests and discovered they provide significant insight into the opposition movement. Firstly, the women of Isfahan province are among the chanters and protestors. Fox News based on analysis of an Iran analyst, asserted that the women of Najafabad in Isfahan province “used to be a traditional bastion of regime support”. Now, these same women are in the streets shouting, “they fed Syria but made our young people turn old”.

It is not just the women of Isfahan, other segments of the regime’s support base are turning against them. The urban and rural poor, the day laborers, the farmers, and the factory workers have all joined the protest movement, uniting all segments of Iranian society in opposition.

Fox News goes on to suggest that this could be a pivotal moment for the Iranian opposition. The residents of the regime heartlands have been the mullahs’ foundations of support. Those residents are now beginning to realise that the mullahs do not have their best interests at heart. This realisation casts uncertainty on the mullahs’ future in power.

The Role of the US

Many in the US government have proposed supporting the Iranian protestors. In his article, Evansky cited a spokesman for Republican Senator Ted Cruz who said that “the United States should be doing everything possible to support these protestors”.

The US government’s stance towards the mullahs is hardening. Since Donald Trump withdrew the US from the Iran deal, he has passed a new round of sanctions, urged European nations to adopt a tougher stance, and put a resolution through Congress pledging US support to the Iranian protestors.

The latest protests and the hardening position of the international community towards the mullahs has set in motion a series of events that will lead to the ultimate collapse of the clerical regime. Like falling dominoes, the rapidly expanding protest movement will become too great for the mullahs to repress and silence.

The mullahs have no solution for containing the chaotic state of the economy and all their measures and plans have failed. Sacking the Central Bank’s president, arresting bazaar merchants, spreading lies and false pretenses are no longer effective. #IranRegimeChange#Iran

The President-elect of the National Council of Resistance of Iran (NCRI), Maryam Rajavi, emphasized the importance of keeping the current movement going. In a statement, she exclaimed, “Iran’s risen and revolting cities are joining the protests, one after the other. The cry for freedom is becoming louder, and the uprising is expanding more and more every moment.”

Rajavi ended her statement by celebrating the powerful political force the Iranian public hold in their hands and their voices. “The is no force more powerful than the united force of young people”.