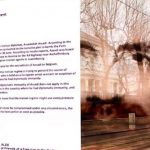 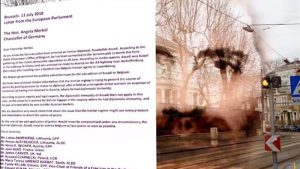 MEPs write to Angela Merkel demanding extradition of Iran’s diplomat/terrorist to Belgium to be put on trial.

Assadollah Assadi, the Iranian regime diplomat who has been charged by German authorities for espionage and conspiracy to commit murder, is now hoping to evade justice. Assadi has diplomatic immunity in Austria, so the Iranian regime has petitioned to have him extradited there, where he can then travel to Iran and avoid responsibility for masterminding the foiled terrorist plot against the annual gathering of the MEK supporters.

If the planned attack had been successful, hundreds of the 100,000 people in attendance could have been killed or injured in the regime’s latest attack on the MEK.

On Wednesday, 23 members of European Parliament wrote a letter to German Chancellor Angela Merkel asking that she extradite Assadi to Belgium so that he may face justice. Assadi has no immunity in Belgium, where the couple who was to carry out the attack was arrested.

The following is the text of the letter from the MEPs:

Letter from the European Parliament

As you know the German police have arrested an Iranian diplomat, Assadollah Assadi. According to the Public Prosecutor’s Office of Belgium, he has been connected to the terrorist plot to bomb the Paris gathering of the Iranian democratic opposition on 30 June. According to media reports, Assadi was based at the embassy in Vienna and was arrested en route to Austria on the A3 highway near Aschaffenburg (Germany) after handing over a bomb to two Belgian-Iranian agents in Luxembourg.

The Belgian government has publicly asked Germany for the extradition of Assadi to Belgium.

We have now received reliable information that the Iranian regime is trying to pervert the course of justice by putting pressure to rescue its diplomat who is held on a European arrest warrant on suspicion of terrorism, by having him returned to Austria, where he had diplomatic immunity.

According to press reports and legal experts, the diplomatic immunity of Assadi does not apply in this case, as the crime he is wanted for did not happen in the country where he had diplomatic immunity, and he was arrested while he was outside Austrian borders.

We are therefore very much concerned about this issue that the Iranian regime might use every pressure and intimidation to divert the course of justice.

As the rule of law and application of justice should never be compromised under any circumstances, the Iranian diplomat, Assadi, must be sent to Belgium to face justice as soon as possible.