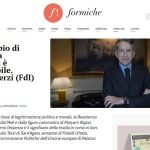 Written by Mohsen Aboutalebi on January 10, 2023. Posted in NEWS 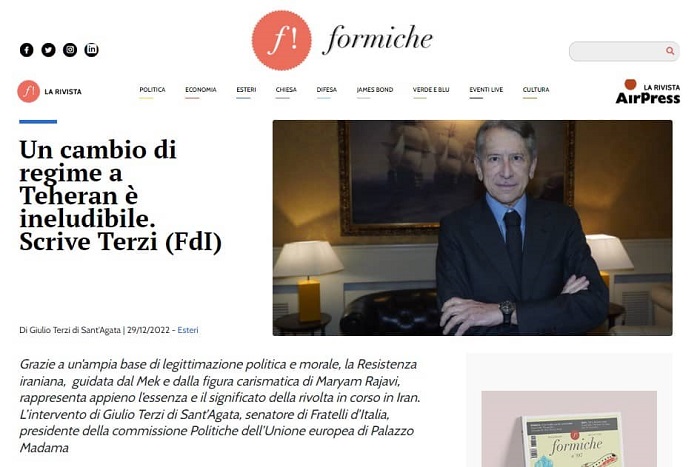 Mr. Giulio Terzi, Senator from the Fratelli d’Italia Party (FDI), explained why he has supported the National Council of Resistance of Iran (NCRI) and its President-elect Mrs. Maryam Rajavi for more than a decade in an article published on the Italian website Fermiche on December 29.

The Iranian national uprising has lasted for more than 107 days despite the shifting pattern of crowd gatherings that occur in a variety of sizes and locations. Iranians, young and old, rally and call for the dictator’s death whenever they find a reason to congregate, sometimes in broad daylight, sometimes in the safety of the night. The persistence of what many refer to as a “revolution in the making” has drawn an international chorus of support. Many world leaders, legislators, non-governmental organizations, and activists have condemned the brutal crackdown on Iranians, and the media in many countries has taken a different tone.

Mr. Giulio Terzi, Senator from the Fratelli d’Italia Party (FDI), explained why he has supported the National Council of Resistance of Iran (NCRI) and its President-elect Mrs. Maryam Rajavi for more than a decade in an article published on the Italian website Fermiche on December 29.

“Over the past four decades, the NCRI has waged a relentless campaign, both inside and outside Iran, to expose the regime’s terrorist activities, and has thus emerged as a viable and democratic alternative to the mullahs. It appears most appropriate that the international community actively supports the NCRI’s president-elect, Mariam Rajavi, and her allied groups in their long march towards freedom and democracy: ‘for an extraordinary country, Iran, where freedom and democracy must shine again,’” he said.

Senator Terzi carefully considers Mrs. Rajavi’s 10-point plan, which aims to guide the NCRI through the interim process following the regime’s fall, in his column. These principles, though temporary, have been unanimously adopted by all NCRI members and serve as a road map toward the drafting of a new constitution for a free and democratic Iran.

Mr. Terzi strongly objected to the West’s failing approach and emphasized its grave consequences, adding that “many Western governments have pursued illusory appeasement policies for far too long, ignoring the crucial contribution of the Iranian people and the MEK’s opposition to the regime. It is obvious that the Iranian regime will never be reformable.

The urgency is thus emphasized in order to prevent Tehran from continuing to massacre and torture its people, destabilizing entire regions of critical importance to Europe, increasing its involvement in Russia’s aggression against Ukraine, directly and through its proxies, Hezbollah and Hamas, threatening Israel’s very existence, and even equipping itself with the atomic weapon, which it could quickly acquire.”

.@FrancoFrattini
Thank you for participating at the #FreeIran gathering. You stressed on the need for a right policy,which focuses on #HumanRights,vis-à-vis the regime in Iran. Continuing to negotiate &dealing with this regime will pose a serious threat to global peace & security pic.twitter.com/eXnPPAQlyu

“The establishment of Iran’s theocratic regime can no longer hide or downplay the magnitude of the uprisings. The Iranian Resistance fully represents the essence and meaning of the ongoing revolt in Iran for a regime change that has become unavoidable,” concludes the former Italian FM.