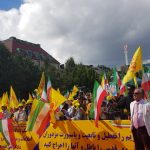 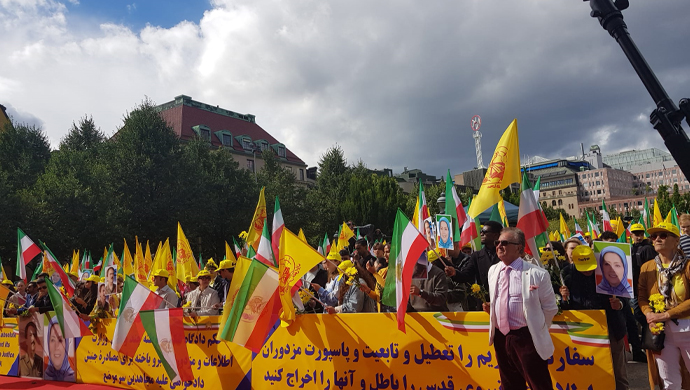 On Saturday, July 16, a sizable crowd of Iranian Resistance supporters gathered in Stockholm, Sweden, to celebrate the historic decision of the Stockholm district court that sentenced Hamid Noury, a former official in Iran’s Gohardasht prison, to life in prison. The People’s Mojahedin of Iran (PMOI/MEK), of which 90% were members or sympathizers, massacred 30,000 political prisoners in the summer of 1988. Noury was being tried for his part in this heinous act. In addition to murder, Noury was found guilty of serious crimes against international law.

As the first Iranian official to be tried and found guilty for his part in the 1988 massacre, this case could serve as a model for other regime officials who were complicit in this and other heinous crimes. The participants emphasized that justice hasn’t been served even though they supported the trial’s verdict, which took more than 33 months and 92 hearings to complete.

“Of course, we welcome the ruling,” said Mrs. Maryam Rajavi, president-elect of the National Council of Resistance of Iran (NCRI). However, full justice will not be served until all masterminds and perpetrators are tried in Iranian people’s courts. Ali Khamenei, Ebrahim Raisi, Hossein-Ali Nayeri, Gholam-Hossein Mohseni Ejei, and others are included in that.

Mrs. Rajavi stressed that one step has been taken on the path to the Call for Justice Movement. “However, it must continue until all the regime’s leaders and officials face justice,” she added. “I want to be clear: Genocide, crime against humanity, and massacre must be recognized – with precisely these legal terms– by national and international courts and the UN Security Council. And international investigation must be carried out in the presence of the representatives of the Iranian Resistance.”

After nearly three years, the Swedish Judiciary handed down its verdict, sentencing to life one of the perpetrators of genocide & crime against humanity in the massacre of political prisoners in 1988. And I stress this is only one out of all the murderers involved#1988Massacre pic.twitter.com/AHY9vnKMBN

According to Kenneth Lewis, one of the plaintiffs’ attorneys in the Noury case, “34 years ago, when the regime was compelled to end the war with Iraq, it was afraid that the Iranian people would punish it for committing this atrocity for such a long time. That’s why Khomeini issued a fatwa to execute all supporters of the PMOI who continued their support for the organization. This led to the execution of probably some 30,000 prisoners. Although the news reached the world, the regime denied that the massacre occurred. They not only denied it, but they tried to hide the evidence by hiding the mass graves where the victims were buried.”

The testimony of the survivors and witnesses to the 1988 massacre, which shed light on the wider role that regime leaders played in this crime against humanity, was one of the trial’s defining features, according to Lewis.

“Aside from Noury’s role, many of these testimonies included others’ roles, including [Hossein-Ali] Nayeri, [Mostafa] Pourmohammadi, [Morteza] Eshraghi, and [Ebrahim] Raisi. The mullahs’ regime is clearly declared to be one of the greatest violators of human rights in the world. With this verdict, it is possible to hold Raisi and Khamenei responsible for crimes against humanity,” Lewis said.

Prosecute Khamenei, Raisi, and all perpetrators of #Iran's summer #1988Massacre for genocide and crimes against humanity.https://t.co/M2KWfT0dm3

Former vice president of the European Parliament Alejo Vidal-Quadras called the decision a “victory for justice and truth against opportunistic policies.”The Belgian government is considering a deal with Tehran that will make it easier for a terrorist diplomat convicted of treason to be returned to Iran, and Vidal-Quadras cautioned that this court case highlights the need to adopt a firm policy against the mullahs’ regime.

“It was proven in court that the Iranian dictatorship is an outlaw political system that inflicts the worst atrocities on its people. No more appeasement. No more dialogue. No more negotiations. The rulers of Iran are a bunch of murderers that should not be accepted as members of the international community. 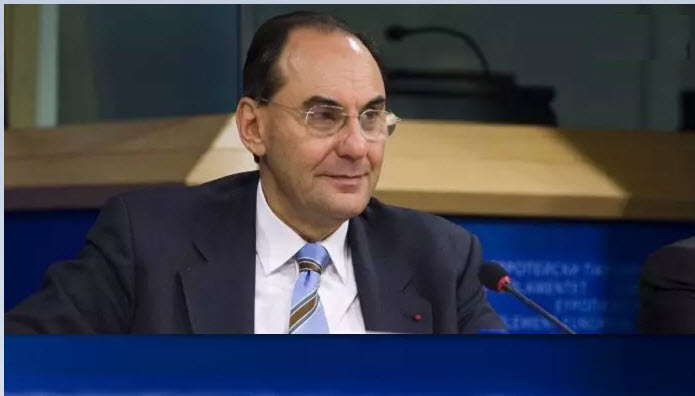 The message of the Stockholm court must be listened to by the Belgian Parliament that should not accept a treaty of impunity for another criminal, Assadollah Assadi. Assadi must stay in prison for the rest of his life,” Vidal-Quadras declared.