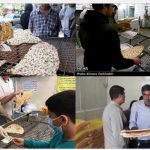 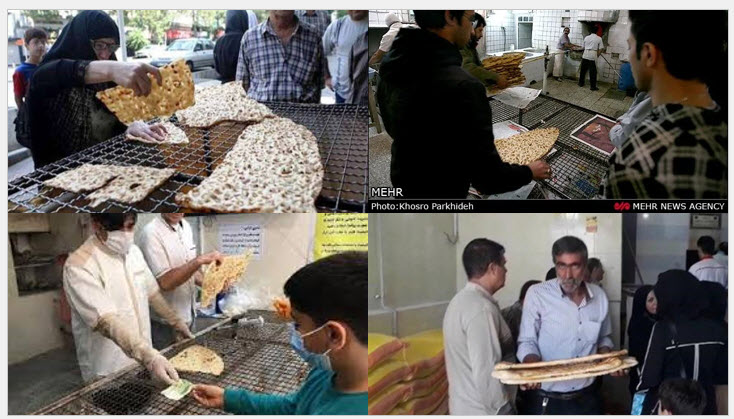 President Ebrahim Raisi of the Iranian regime spoke of “developments” in his inauguration speech, saying that his presidency will mean a “change in the status quo.”Iran is experiencing severe economic crises nine months into his presidency, with people’s livelihoods plummeting, millions falling into poverty, and even bread becoming a luxury item.

On May 4, the regime’s official IRNA news agency published a report emphasizing that “the only solution left is to cancel all bread subsidies,” implying an unbridled rise in bread prices.

As a result, prices of various types of bread began to rise at an unprecedented rate across Iran. The cost of sandwich buns increased by 1,300%. People on social media were reporting various price hikes, forcing the regime’s state media, such as the “Eslahat News” website on May 3, to admit that people can no longer afford simple sandwiches because bread has become far too expensive.

On May 5, Ebrahim Sayami, a top official in the regime’s Ministry of Economic Affairs and Finance, announced that bread would be rationed, with each loaf costing 100,000 rials (around 35 cents). In order to avoid a social backlash, reports claim that regime officials have denied any plans to ration bread.

It’s worth noting that the regime’s economic mafia, which is linked to the mullahs’ Supreme Leader Ali Khamenei, has been plundering the Iranian people for years by raising the prices of medicine and edible goods in tandem with other basic necessities. In just nine months, regime officials have acknowledged that bread is becoming scarce, that the prices of various medicines have increased by around 1,000 percent, and that rice prices have increased by 130 percent.

When people started buying macaroni instead of rice because rice prices were rising, state officials increased the price of macaroni threefold. According to a May 5 report wired by the semi-official ILNA news agency, “the price of poultry will soon increase to 700,000 to 800,000 rials per kilogram ($2.45 to $2.80).” Keep in mind that the average Iranian worker earns only ten million rials per month. A kilogram of chicken would cost almost 10% of a worker’s monthly wage. How does a worker like this make ends meet?

Officials in the regime are fully aware of the alarming situation. The ruling mullahs face a choice between continuing to fund regional terrorism and warmongering and pursuing nuclear weapons and ballistic missiles, which is pushing more people into poverty.

Any such reversal, according to Khamenei, would be devastating to the regime’s pillars of power. On March 10, he asked, “Why should we forego [these initiatives]?” This indicates that the mullahs’ regime is determined to carry out their long list of nefarious policies at the expense of the Iranian people, who are suffering from skyrocketing prices for basic foods, gasoline, housing, medicine, and now, even ordinary bread, which can be described as the most basic daily food item for any society.

The mullahs’ actions, on the other hand, will not go unanswered. Protests against rising prices are becoming more common, as seen in the city of Izeh in southwest Iran on Friday night, May 6. Locals were protesting in the streets, and some reports claim that protesters took over a flour warehouse.

The Basij paramilitary of the Revolutionary Guards (IRGC) warned of possible protests over basic goods prices in a letter to the regime’s president. “The society is not prepared for unexpected price increases,” the text says, adding that such decisions can cause social unrest.

This is the latest in a series of similar warnings from regime officials and institutions. A nationwide protest erupted in November 2019 after the price of gasoline unexpectedly increased. The IRGC Basij was instrumental in putting down the uprising and murdering over 1,500 protesters.

On May 5, a senior member of the mullahs’ Qom sanctuary said that “if skyrocketing prices are not brought under control, there will not be a revolution.” The hungry are likely to revolt; a revolt is far more dangerous than a revolution!”