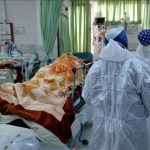 Written by Mohsen Aboutalebi on March 21, 2022. Posted in NEWS 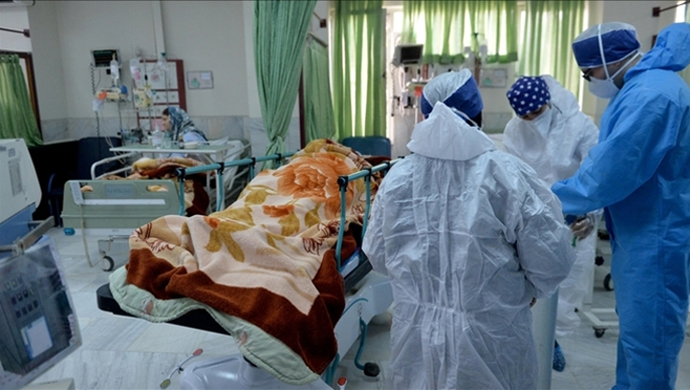 The novel coronavirus, also known as COVID-19, has taken the lives of over 524,900 people throughout Iran, according to the Iranian opposition PMOI/MEK.

Over 524,900 people have died of the novel coronavirus in 547 cities checkered across all of Iran’s 31 provinces, according to reports tallied by the Iranian opposition People’s Mojahedin Organization of Iran (PMOI/MEK) as of Sunday afternoon local time, March 20. The official death toll declared by the regime stands at 139,662, around a fourth of the actual figure.

The regime’s Health Ministry announced the mullahs’ engineered Covid-19 numbers from the past 24 hours on Monday as 1256 new cases and 52 deaths. Furthermore, 1936 patients are in ICUs and 283 of the new cases have been hospitalized. 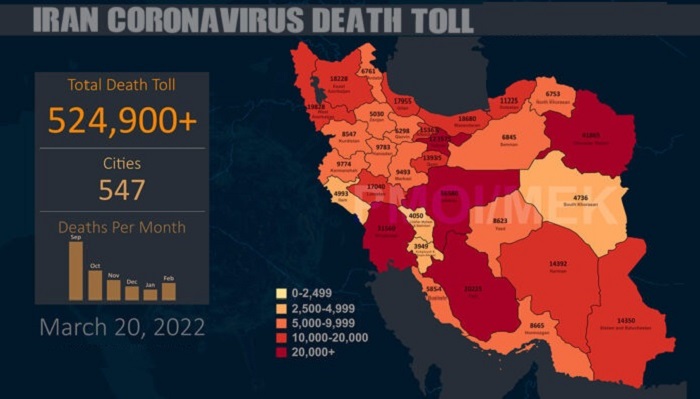 The regime’s Health Ministry announced the mullahs’ engineered Covid-19 numbers from the past 24 hours on Monday as 1256 new cases and 52 deaths.

“During the past week, the numbers of deaths and those hospitalized due to coronavirus in the province of Tehran, Lorestan, Golestan, and Hamedan have been higher than the national average,” according to a Sunday report wired by the Tasnim news agency, an outlet linked to the Revolutionary Guards (IRGC) Quds Force.

“The lifting of some restrictions led to oversimplification. Covid is still on the lookout to strike more blows and circulating in some cities,” said Alireza Zali, head of the Tehran Covid-19 Task Force on Saturday, according to the IRGC-affiliated Fars news agency.

“We currently have 390 coronavirus patients hospitalized, of which 84 are in ICUs,” said the spokesperson of the Isfahan Medical Sciences University on Saturday, according to the Mehr news agency, an outlet linked to the regime’s Ministry of Intelligence and Security (MOIS).

“We should not normalize the status quo at all, and we should know that the threat of covid remains very real,” said the deputy governor of Fars province on Sunday, according to the regime’s official IRNA news agency.

“We currently have 426 coronavirus patients hospitalized, of which 74 are in ICUs,” according to a statement released on Sunday by the Shiraz Medical Sciences University regarding Fars province.

There are currently 292 coronavirus patients hospitalized in West Azerbaijan province, of which 120 are in ICUs and 32 are under ventilators, according to a Saturday report wired by the regime’s official IRIB news agency.