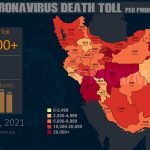 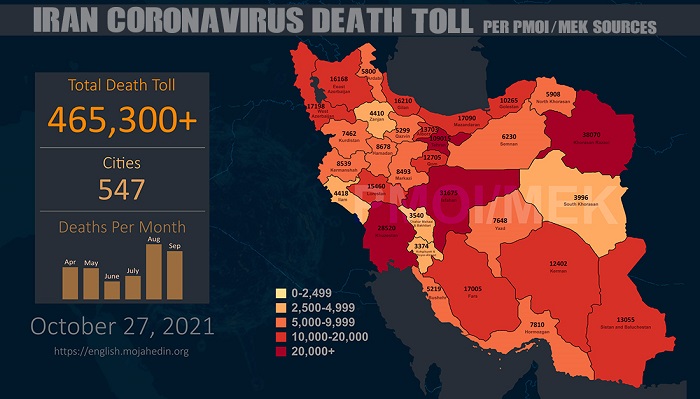 According to the Iranian opposition group The National Council of Resistance of Iran (NCRI), and the People’s Mujahedin of Iran (PMOI / MEK Iran), 465,300 people had died in Iran as a result of the Covid-19 outbreak as of October 27.

The state-run Hamdeli daily wrote today: “To date, the authorities have dealt with the sixth COVID-19 outbreak has been with ‘denial’, ‘simplification’ and ‘gradual release of the statistics.’ If the actual COVID-19 statistics were unclassified, the depth of the tragedy in the sixth outbreak would become apparent.

No independent sources confirm [The state controlled] Coronavirus statistics, and the National Medical Organization has repeatedly stated that the actual statistics are often several times greater than the official statistics. Undoubtedly, if the country had not faced an eight-month delay in global vaccination and the opportunity to purchase credible vaccines from the COVAX vaccine roll-out had not been lost, there would have been hopes for controlling the disease.”

If the actual COVID-19 statistics were unclassified, the depth of the tragedy in the sixth outbreak would become apparent. The actual statistics are several times the announced figures. (State-run daily, Hamdeli, October 27, 2021)

(PMOI / MEK Iran) and (NCRI): COVID-19 fatalities in 547 cities exceed 465,300. Tehran is in crisis as long as we don’t have a national system to evaluate mutated viruses, we will always be facing threats and we need to definitely provide measures to have an immediate and timely response,” said a senior health official in Tehran.

Secretary of the National Epidemiology Committee: In North and South Khorasan, Khorasan Razavi, and Sistan and Baluchestan, a rising trend of COVID-19 infection has begun. (ISNA news agency, October 27, 2021)