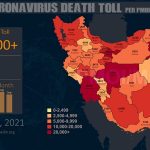 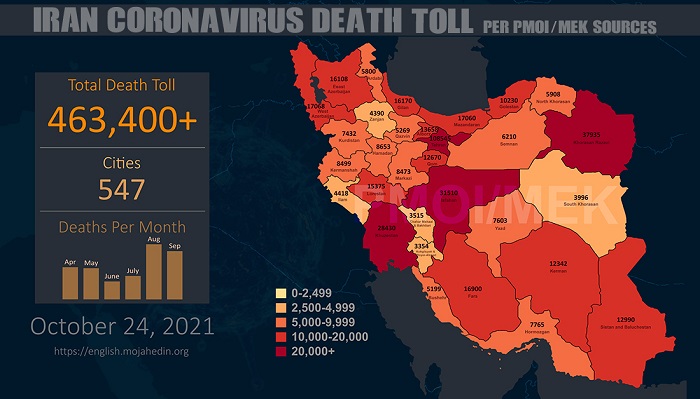 According to the Iranian opposition group The National Council of Resistance of Iran (NCRI), and the People’s Mujahedin of Iran (PMOI / MEK Iran), 463,400 people had died in Iran as a result of the Covid-19 outbreak as of October 24.

Member of the regime’s Parliamentary Health Commission: We have had a 100% increase in COVID-19 hospitalizations in some parts of the country. (ILNA news agency, October 24, 2021)

Raisi, the henchman of the 1988 massacre

Ebrahim Raisi, the henchman of the 1988 massacre, stressed yesterday: “the need for the Health Ministry’s strong support for the domestically produced COVID-19 vaccines,” today the regime’s Minister of Health admitted that the domestic vaccine was nothing more than a mirage and so far, only 14 million doses have been produced.”

Speaking with the State TV today, he added, “If we want to delay (treatment) now until 160 million doses of domestic vaccines that we need are delivered, we will have to wait a long time.” The remarks by the regime’s Health Minister are an explicit acknowledgment of the fact that Khamenei is responsible for the mass murder of people who died because of the ban on the import of the COVID-19 vaccines.

(PMOI / MEK Iran) and (NCRI): The ascension of Ebrahim Raisi to the presidency coincided with an increase in Covid-19 casualties in Iran. Coronavirus.

(NCRI) and (PMOI / MEK Iran): COVID-19 fatalities in 547 cities exceed 463,400. Tehran is in crisis as long as we don’t have a national system to evaluate mutated viruses, we will always be facing threats and we need to definitely provide measures to have an immediate and timely response,” said a senior health official in Tehran.

Kurdistan University of Medical Sciences spokesperson said: “Only 32% of the Kurdistan Province’s population have received two doses of COVID-19 vaccines, and the situation will not improve until vaccination reaches 70%,”. (Mehr news agency, October 24, 2021)

Kermanshah University of Medical Sciences spokesperson said: “195 new COVID-19 patients have been hospitalized in the past 24 hours, and 11 patients have lost their lives,”. (Mehr, October 24, 2021)