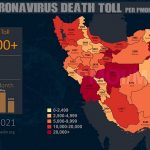 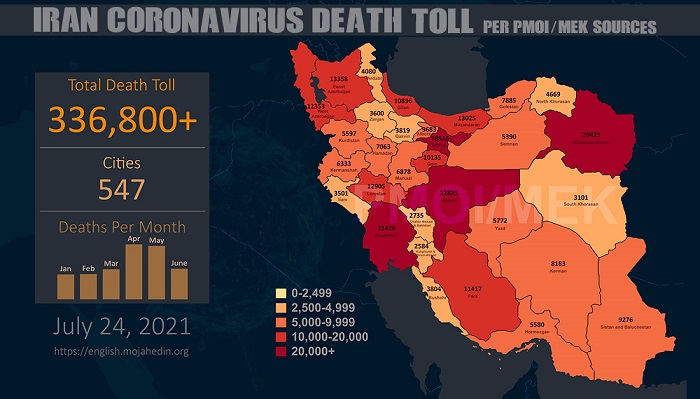 The National Council of Resistance of Iran (NCRI), and the People’s Mujahedin of Iran (PMOI / MEK Iran), reported that the coronavirus death toll in 547 cities surpasses 336,800.

Unable to overcome the situation

The National Coronavirus Combat Taskforce (NCCT) spokesperson Nader Tavakoli said: “We have not had such an experience in Tehran in the past 16 months. We do not have a precise estimate of how long this increasing pattern will continue. 60% of the hospital beds are allocated to COVID-19 patients, and still, we have been unable to overcome the situation,”. (Fars news agency, July 24, 2021)

Outbreaks are getting worse by the minute

Khomeini Hospital spokesperson said: “The fifth COVID-19 outbreak results are getting worse by the minute. Outpatient visits have increased dramatically, and we had a new record in hospitalizations over the past 17 months,”. (State-run media, Arya, July 24, 2021)

GolestanUniversity of Medical Sciences spokesperson said: “In many cities, the COVID-19 hospitalization has exceeded the red condition,”. (Fars, July 24, 2021)

Shiraz University of Medical Sciences spokesperson said: “In the past 24 hours, 363 new COVID-19 patients were admitted, and the number of hospitalizations in the Province reached 2,502,”. (Fars, July 24, 2021)

(PMOI / MEK Iran) and (NCRI): Nurses and Doctors in hospitals are under tremendous pressure due to hard-working of the coronavirus crisis in Iran.