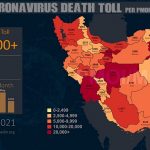 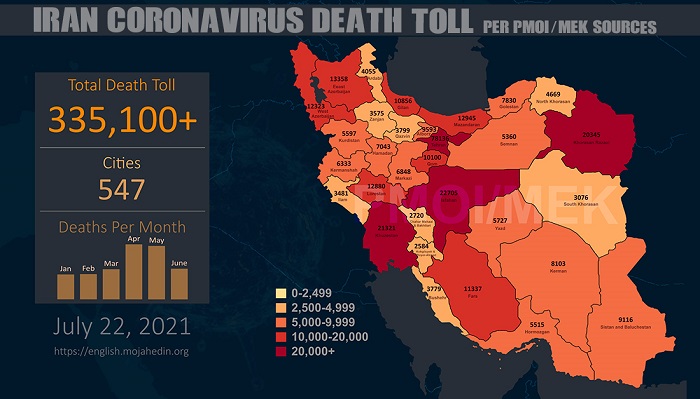 The National Council of Resistance of Iran (NCRI), and the People’s Mujahedin of Iran (PMOI / MEK Iran), reported that the coronavirus death toll in 547 cities surpasses 335,100.

Qom Health Center spokesperson said: “All COVID-19 indicators in this province have increased by 100% compared to the previous week,”. (IRNA news agency, July 22, 2021)

(NCRI) and (PMOI / MEK Iran): COVID-19 fatalities in 547 cities exceed 335,100. Tehran is in crisis as long as we don’t have a national system to evaluate mutated viruses, we will always be facing threats and we need to definitely provide measures to have an immediate and timely response,” said a senior health official in Tehran.

Mashhad University of Medical Sciences spokesperson said: “The COVID-19 virus is spreading rapidly during the fifth outbreak, the number of hospitalizations has reached 1,300, and all unnecessary surgeries have been canceled,”. (State Radio and TV news agency, July 22, 2021)

Isfahan University of Medical Sciences spokesperson said: “In the past 24 hours, 288 people were hospitalized for COVID-19, while 117 patients were discharged,”. (IMNA news agency, July 22, 2021)

Golestan University of Medical Sciences spokesperson said: “Out of 1,003 COVID-19 patients who were hospitalized until yesterday, some were discharged, but 200 others replaced them,”.

Yazd University of Medical Sciences spokesperson said: “The rising number of people being hospitalized is concerning. 897 patients are hospitalized, of which 130 are in ICUs,”. (Mehr news agency, July 22, 2021)