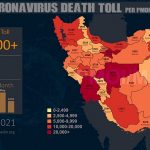 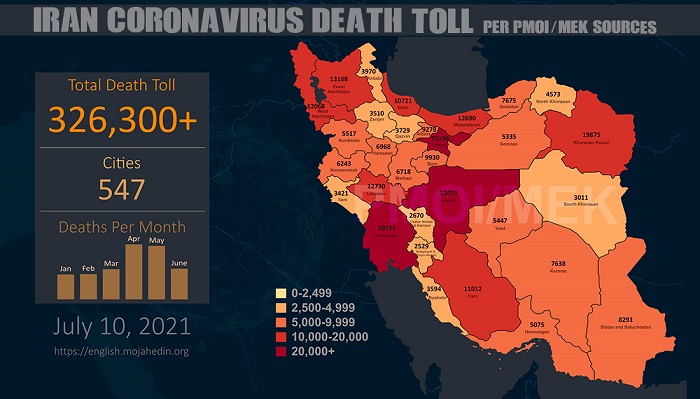 The National Council of Resistance of Iran (NCRI), and the People’s Mujahedin of Iran (PMOI / MEK Iran), reported that the coronavirus death toll in 547 cities surpasses 326,300.

The regime’s health minister Namaki said: A mafia group is manipulating the vaccine issues, I will reveal all the documents in this field one day. If we do not eradicate corruption, we will collapse. (IRNA, July 10, 2021).

The head of NCCT in Tehran Alireza Zali said: “I called for the readiness of hospitals and treatment centers to receive new patients in the coming days,  we are now on the fifth outbreak, so that hospital management can act more agilely in deciding on hospital beds; Therefore, it is necessary to set up a clearance committee to prepare for the fifth outbreak.”. (Regime TV, July 10, 2021)

Markazi University of Medical Sciences spokesperson said: ” More than 300 delta-type coronaviruses have been identified, and about half of the positive coronavirus specimens are delta-type,”. (Government News Agency, July 10, 2021)

The capacity of the province’s medical centers is being completed (Government News Agency, July 10, 2021).

Shiraz University of Medical Sciences spokesperson said: “the number of hospitalizations has reached 1697 and this is a serious warning (State-run News Agency, July 9, 2021).

Zabul University of Medical Sciences spokesperson said: “55% of the corona tests in the Sistan region are positive,”. (ISNA July 10, 2021).

Hormozgan  University of Medical Sciences spokesperson said: “We are facing a severe shortage of beds in hospitals and 200 patients are admitted daily and 110 patients need ICU,”. (ISNA July 10, 2021)

The head of the Hormozgan emergency department said: “the province is facing a crisis of lack of ambulances and at least 35 ambulances equipped with the pre-hospital emergency system should be added,” (IRNA, July 9, 2021).

(NCRI) and (PMOI / MEK Iran): COVID-19 fatalities in 547 cities exceed 319,100. Tehran in crisis as long as we don’t have a national system to evaluate mutated viruses, we will always be facing threats and we need to definitely provide measures to have an immediate and timely response,” said a senior health official in Tehran.