MEK: Iranian Terror Network in UK and EU Must be Irradicated

Written by Mohsen Aboutalebi on April 27, 2021. Posted in MEK (PMOI) IN MEDIA

(NCRI) and (PMOI / MEK Iran): The regime has administrated many assassination attempts through the Ministry of Intelligence and Security (MOIS) in Europe.

By DR. RICHARD SCHOEBERL: The Us and Iran continue ‘indirect talks’ in Vienna as the international community focuses on suppressing Tehran’s acquisition of nuclear weapons. State-sponsored terrorism however poses a more immediate threat as it reaches European soil.

Iranian terrorism often occurs in open conflict areas like Syria, Yemen, and Iraq. Tehran’s terrorist proxy Hezbollah, however, is an example of state-funded terrorism reading the Western hemisphere, materializing in attacks like the 1994 bombing of the Argentine-Israeli Mutual Association Building.

Iran Ministry of Intelligence and Security (MOIS) in Europe

The regime has administrated many assassination attempts through the Ministry of Intelligence and Security (MOIS) in Europe. These agents however have never been held accountable by Western authorities, through the coupling of the organizational skills of the terror networks and European disinterest in confronting such transgression and sacrificing Iranian oil and trade.

The representative of the United Nations for the democratic opposition, the National Council of Resistance of Iran (NCRI), Kazem Rajavi, was ambushed in 1990 and killed by an Iranian gunman in Geneva. Thirteen people fled to Iranian following this. Around two years later, a pair of these operatives were arrested in France where a plot of an attack in Germany would have been planned. However, despite arrests, these people were escorted to the airport to return to Iran. 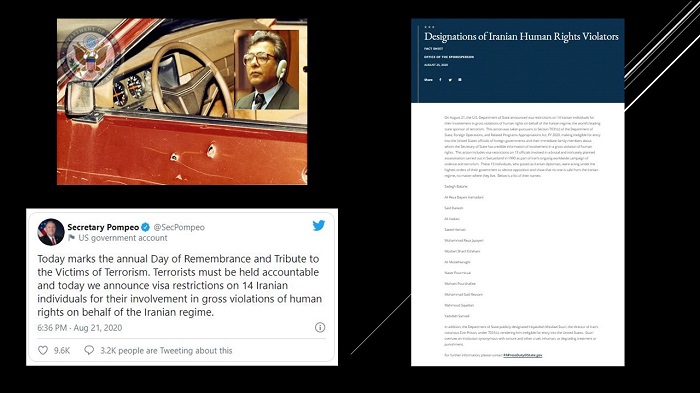 No one held accountable for the murder

There continues to be no one held accountable for the murder. Rajavi’s case speaks to the commonplace assassinations, terrorist attacks, and domestic human rights abuses by Iranian officials. This bolsters the regime’s pursuit of other malignant activities.

There has been an observable uptake in Iranian terrorism in Europe. In France in June 2018, the NCRI organized a conference attended by tens of thousands of Iranians, lawmakers, scholars, and security experts from across the world. A bomb plot was later thwarted at the venue by multiple law enforcement groups.

(PMOI / MEK Iran) and (NCRI): Iranian diplomat in the Iranian embassy in Vienna, organized for them to plant a bomb at the 2018 annual Free Iran rally that took place in Villepinte just outside Paris.

Plant a bomb at the 2018 annual Free Iran rally

An Iranian-Belgian couple tasked with planting the bomb was arrested by a counterterrorism operation, another Iranian Belgian who entered the event separately was also apprehended along with a high-ranking diplomat working out of the Iranian embassy in Vienna. Assadollah Assadi, the diplomat, was found to be the originator of the scheme.

After several years of investigation by European law enforcement agencies in Belgium, France, Germany, and the Netherlands, it could be concluded that Assadi had personally brought the explosive TATP, on a commercial flight from Tehran to Vienna in June of 2018, in a diplomatic pouch. He handed the explosive to the prospective bombers in Luxemburg later in the month. It has been established that Assadi acted on the behest of the regime.

In recent years, around five Iranian diplomats have been expelled from France, the Netherlands, and Albania for complicity in terrorism. Assadi’s co-conspirators were in regime sleeper cells in Europe. The arrest yielded information on a large-scale network that was cultivated by Assadi.

(PMOI / MEK Iran) and (NCRI): Assadi was at the head of the Iranian regime’s intelligence network in Europe.