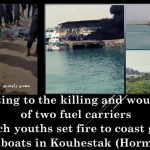 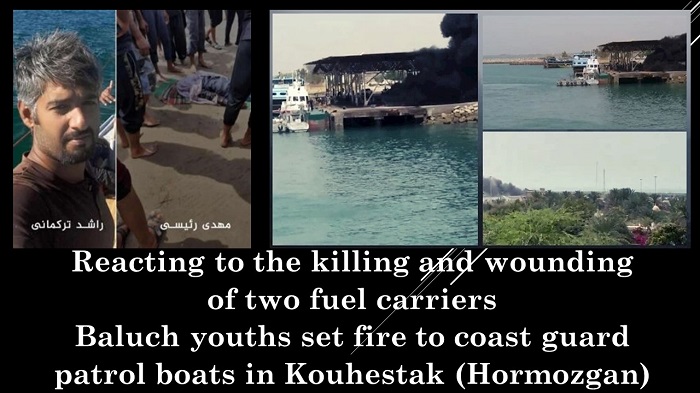 The National Council of Resistance of Iran (NCRI), and the People’s Mujahedin of Iran (PMOI / MEK Iran), reported that the Baluch youths set fire to coast guard patrol boats in Kouhestak (Hormozgan), in reaction to the killing and wounding of two fuel carriers.

Fire on the deprived fuel carriers

The main opposition to the Iranian regime, (NCRI), and (PMOI / MEK Iran), has been reporting on Friday, March 12, that the regime’s repressive coast guard opened fire on the deprived fuel carriers in Kouhestak port of Sirik county of Hormozgan (southern Iran).

One fuel carrier, Mehdi Reisi, died of gunshot wounds to his head, and another, Rashid Turkmani, suffered leg wounds.

In protest against this heinous crime, other fuel carriers and locals took to the streets of Kouhestak and set fire to several coast guard patrol boats. The repressive regime forces fired on protesters from land and sea, wounding several of them.

The mullahs’ regime fearing the spread of the protests to other regions. The Revolutionary Guards immediately sent reinforcements, including anti-riot forces, from Minab and Sirik (neighboring cities). The suppressive regime to prevent the spread of the news disrupted the internet in the region to suppress the Baluchi protesters in the port of Kouhestak.

The atmosphere is very tense in the region

People were in the streets in the afternoon hours and the atmosphere is reported to be very tense. The reports indicate several other protesters have been injured as a result of the repressive forces opening fire.

There were reports that indicate anger is escalating among the local population, leaving authorities extremely concerned and already scrambling to cut-off or severely slow internet connections to prevent reports of this incident from leaking to the outside world.

Mullah’s regime maintains a heightened security presence in the city and surrounding area until the unrest subsides. Mullah officials could implement temporary telecommunications disruptions to prevent protesters from organizing. Authorities could also enforce other restrictions, including curfews, road closures, and checkpoints. Further clashes are possible. Violence could escalate if additional casualties occur during the ongoing protests.

The Iranian Resistance, (NCRI), and (PMOI / MEK Iran), salutes the Baluchi protesters and calls on the youth in Sirik, Hormozgan, and Sistan, and Baluchestan Province to rise in support of the protesters.

Protests in Sistan and Baluchistan

There were several deaths and casualties among the angry locals who responded by storming the governate an IRGC base. When news of the events spread, it resulted in locals of surrounding towns and cities protesting too.