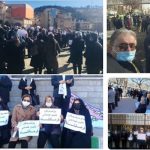 Written by Esmail Mohades on February 19, 2021. Posted in NEWS 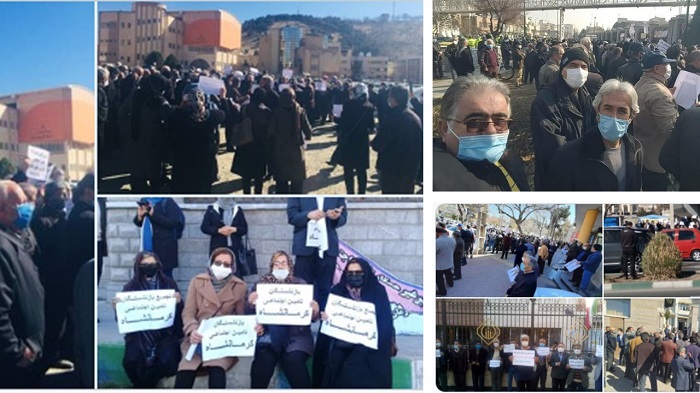 The National Council of Resistance of Iran (NCRI), and the People’s Mujahedin of Iran (PMOI / MEK Iran) reported that large protests by pensioners took place in 18 cities across Iran.

The protesters were demanding a change in the failing economy, chanting, “Enough with the tyranny, our tables are empty” “Inflation and high prices, what do you have to say [Hassan] Rouhani?” “We will not stop until we get back our rights,” “The poverty line is 120 million rials, our income is 30 million rials.”

Protesters also stood against the regime’s statements about the causes of the financial crisis, stating, “Our enemy is right here, they’re lying that it is the U.S.” They dismissed the regime’s claims that economic problems are coming from U.S. sanctions or international pressure. 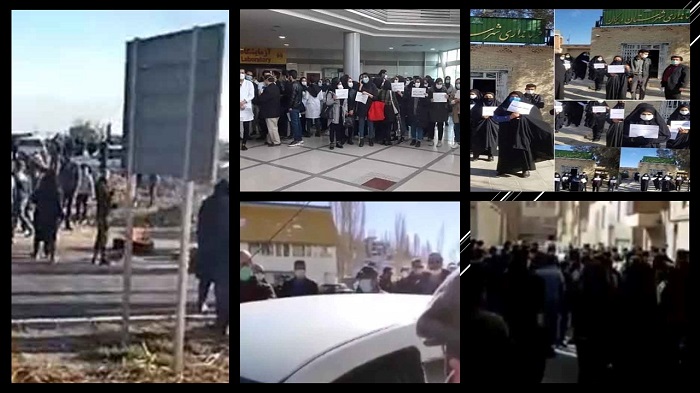 (NCRI) and (PMOI / MEK Iran): Iranian people from different walks of life continued their protests against the regime’s mismanagement, corruption, and nepotism.

Protests by teachers and local investors

Teachers and local investors supported the pensioners in a gathering at the parliament in Tehran and this is the fourth nationwide protest of this collective in less than two months. Similar protests have also been taking place across Iran by citizens who have been suffering in poverty.

The regime continuously utilizes oppressive tactics, violently shutting down organized protests. However, on 14 February, there was still a high number of participants that wanted to deliver their message to the regime. This is a sign that the people understand the necessity of bravely rallying against the regime’s repressive apparatus; creating a new balance of power between the regime and the people.

In November 2019, the largest rally since the 1979 revolution emerged within a few days, with people joining together in the streets of nearly 200 cities. Protestors were met with brutal oppression and heavy security forces.

Less than two months later, in January, people reunited again to protest the regime’s shooting of a civilian airliner, which killed all 176 passengers on board. This demonstrates the determination of the Iranian people to defy suppression and push for regime-change.

The protests would have surely continued to escalate if it wasn’t for the outbreak of the coronavirus pandemic.

(NCRI) and (PMOI / MEK Iran): Fallen for Freedom in November 2019 Uprising Across Iran.

The constant rise of prices over the last few years has pushed people to their limits beyond the November 2019 protest. Several state-run media channels warned of the extreme financial crisis that has plunged Iran into a state of poverty. The state-ran publication, Jahan-e Sanat, declared that the root of Iran’s economic problems comes “from within” and corruption has only “increased the intensity of the spread of economic illnesses.”

These are the appalling conditions that have forced the people to protest for basic necessities, such as affordable food. More protests like the one we witnessed in November 2019 will surely take place when the regime cannot ensure Iran’s citizens have access to essentials for survival. The publication Mardom Salari affirmed, “We will witness problems in the society, and chaos will engulf all classes of the society.”

The Iranian regime’s crimes and violations of human rights have been pointed out by the (PMOI / MEK Iran), including its internet shutdown and its brutality towards the people simply exercising their rights to peacefully protest.