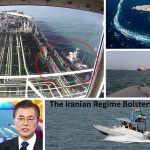 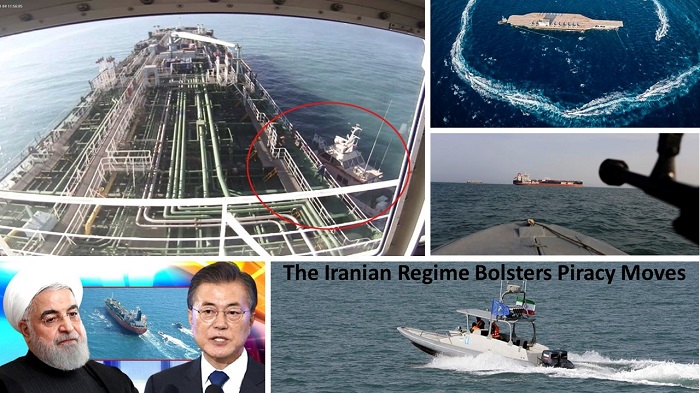 The National Council of Resistance of Iran (NCRI), and the People’s Mojahedin Organization of Iran (PMOI / MEK Iran) reported that the Islamic Revolutionary Guard Corps (IRGC) seized a South Korean-flagged tanker in the Strait of Hormuz last week. The intention of using the ship and its crew as leverage during a meeting with a South Korean delegation over the $7 billion in Iranian oil revenues that are frozen because of US sanctions, according to former European Union Vice President Alejo Vidal-Quadras.

The regime has denied this, saying that the tanker was seized because it was polluting Iranian waters, with Foreign Minister Javad Zarif claiming that the ship’s release was a court matter with no government input, but Vidal-Quadras said this was a common move by the regime to have “so-called moderate officials” deny responsibility while the mullahs still benefit.

He also called into question the Judiciary’s independence in politically sensitive cases, saying that some of these cases were resolved by “prisoner swaps, ransom payments, and other arrangements” that benefitted the regime and indicated the political nature of the charges.

One key example he brought up was the 2016 case of the 21 Iranian nationals released from American prisons (or who had charges dropped) as well as the $700 million ransom paid for four Americans arrested on “trumped-up national security charges”.

This led to the arrest of more Iranian-American dual nationals, as well as those from elsewhere in the West, including Ahmadreza Djalali who is at imminent risk of execution.

(PMOI / MEK Iran): Iranian Terrorists Held in the EU Could be Released With a Hostage Exchange Deal.

It appears that he was given a stay of execution because of a rare show of firmness from Europe, which favors appeasement of Iran, because Belgium not only refused to back down on the terror trial of Iranian diplomat Assadollah Assadi, accused of attempting to blow up a 2018 Free Iran rally by The National Council of Resistance of Iran (NCRI), and the People’s Mojahedin Organization of Iran (PMOI / MEK Iran) near Paris but also said that they would end relations with Iran if Djalali was executed.

Vidal-Quadras said that the regime is not only using hostages to blackmail the West but also increased nuclear activities that are banned under the 2015 nuclear deal, including the enrichment of uranium to 20%.

EU foreign policy chief Josep Borrell reacted to this on Monday by saying that Iran’s actions risked “undermining” the deal and called on the mullahs to “refrain from further escalation” and go back on this action.

Vidal-Quadras wrote: “[The West] must understand that when Iranian officials like Foreign Minister Zarif refuse to intervene on behalf of the victims in that incident, it is not because they are powerless to stop the IRGC, it is because they were coordinating with those “hardliners” in the first place and are allowing them to do the dirty work of pursuing leverage while the Foreign Ministry negotiates from behind the shield of plausible deniability.

This is not mere speculation about Tehran’s intentions. At various times and in various situations, the “moderates” have straightforwardly acknowledged that their role is to prosecute a charm offensive that serves familiar, hard-line objectives.”