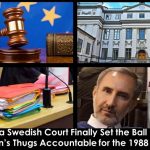 MEK: Will a Swedish Court Finally Set the Ball Rolling on Making Iran’s Thugs Accountable for the 1988 Massacre?

(NCRI) and (PMOI / MEK Iran): The results of the court hearing and trial could resonate and send shock waves through Iran’s elite as several of the 1988 era thugs involved in the massacre are now part and parcel of the mullahs’ regime.

It is 32 years since over 30,000 Iranians were massacred by their own government for their allegiance to the opposition organization, the  People’s Mojahedin Organization of Iran (PMOI / MEK Iran). Since then, the people who were responsible for the fake trials and executions have for the most part either faded from sight or given influential jobs within the Iranian regime. The international community has kept quiet about the massacre despite the Iranian opposition movement, (NCRI) and (PMOI / MEK Iran) attempting to urge the United Nations to officially investigate it.

The upcoming trial of an Iranian in Sweden

Now, a glimmer of hope for the families of those executed has arrived in the form of an upcoming trial of an Iranian in Sweden. A Swedish court will hear allegations against Hamid Noury, widely touted as a former torturer in Tehran’s Gohardasht Prison. The court will hear that he has been accused of committing a “crime against humanity.” The results of the court hearing and trial could resonate and send shock waves through Iran’s elite as several of the 1988 era thugs involved in the massacre are now part and parcel of the mullahs’ regime.

Iranian opposition the National Council of Resistance of Iran (NCRI), and the  People’s Mojahedin Organization of Iran (PMOI / MEK Iran) reported that Noury was arrested two years ago while visiting Sweden. He was reported to be responsible for leading many of the political prisoners on death row to the gallows in 1988 and may have personally been involved in the actual execution act.

The regime attempts to deny the massacre

The executions followed kangaroo style courts that considered support, however flimsy, for the (PMOI / MEK Iran) as justification for murder. Most family members were never informed of the executions and even today, the regime attempts to deny the massacre ever happened or downplays the numbers involved. Most prisoners executed were dumped in mass graves, the location of which has remained a secret.

Amnesty International released a report in 2018 that clearly implicated many of those in the regime who were rewarded after their efforts in slaughtering their own countrymen. The mullahs have gone out of their way to avoid any international investigation into the atrocity.

Like others who were responsible for the massacre, Noury is a good example of one of these thugs who was promoted by Ruhollah Khomeini, the regime founder after showing just how good he was at torturing prisoners. The promotion was soon to the notorious “death commissions” who made the actual decisions about who was to be executed.

The key officials who should be a target of an investigation

Evidence that will be heard by the Swedish court against Noury includes testimony from several survivors of the 1988 prisons, mainly political prisoners incarcerated for their support for the (PMOI / MEK Iran). They gave evidence about seeing Noury torture and execute prisoners. Evidence was via video conferencing facilities.

A conviction against Hamid Noury would hopefully be one step towards making other perpetrators of the massacre accountable for their heinous acts. Iran’s regime has got away with avoiding accountability for far too long.

Three of the key officials who should be a target of an investigation are Ebrahim Raisi, the current head of Iran’s Judiciary, the Supreme Leader, Ali Khamenei, and regime president, Hassan Rouhani. All three, amongst others, should face justice in the International Criminal Court for their crimes against humanity.

In another positive development, seven top UN human rights experts signed a letter requesting a full international investigation into the 1988 massacre and labeling it a major crime against humanity. Maybe the tide is turning against those involved in the massacre.

As the letter by the human rights said “the failure of [UN] bodies to act had a devastating impact on the survivors and families as well as on the general situation of human rights in Iran and emboldened Iran to… maintain a strategy of deflection and denial that continue to this date.”

Sweden is well placed to set the ball rolling that could finally topple the mullahs and the thugs they have protected up to now.