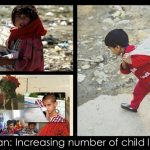 Written by Amineh Qaraee on November 12, 2020. Posted in NEWS 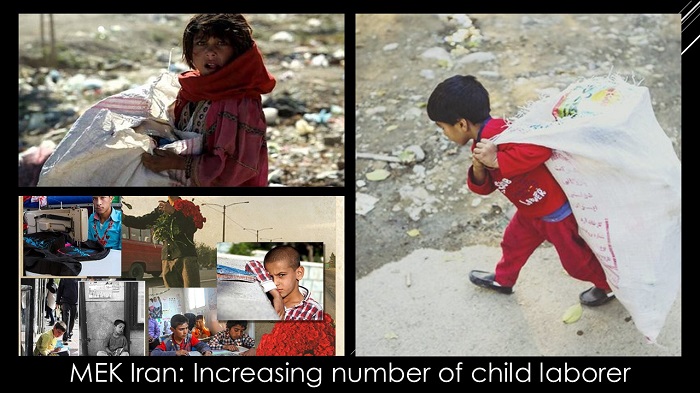 (PMOI / MEK Iran), seven million of Iran‘s children are forced into work before they are legally able to.

There are many social problems that have been plaguing Iran for years. One of these problems that seem to be getting worse is child labour. The National Council of Resistance of Iran’s (NCRI), and the People’s Mojahedin Organization of Iran (PMOI / MEK Iran), the main opposition to the Iranian regime, has reported that unemployment is rising across the country, and more and more children are joining the workforce or simply begging in the streets.

Today, June 12th, is World Day Against Child Labor#Iran, ruled by the mullahs' regime, has a child labor population of 7 million.
Be their voice. pic.twitter.com/PUXIT8AJ5C

Of course, the conditions that these children are enduring is tough and it is thought that many traffickers are exposing them to sexual and physical abuse. Drug addiction is also a worrying problem concerning children.

MEK supporters inside Iran reported that the problem is primarily concentrated around large towns and cities. Mashhad, for example, has a large number of child labourers with the city’s deputy mayor recently saying during an interview with a state-run media outlet that the Coronavirus health crisis, the (NCRI), and the (PMOI / MEK Iran), has reported that more than 150,700 people across Iran have died after contracting COVID-19.

The dire economic conditions are resulting in a rise in the number of child labourers. Mohammad Moshefi admitted also that many of the children are working for traffickers and profiteers.

#Iran: Official Sexually Abuse Child Labourers
Child labourers in Iran are being physically and sexually abused by local public officials, as they try to earn small amounts of money working on the streets, according to a video published by state-run media outlet Asr-e Iran. pic.twitter.com/HPpAjdaMe4

Earlier this month, the Iranian regime’s Deputy Minister of Justice for Human Rights Mahmoud Abbasi said that there are, according to a survey conducted by an NGO last year, at least 4,600 children working as garbage collectors in Tehran. He too pointed to the abuse that these children suffer and even admitted that many of those exploiting the children are in fact working in conjunction with the city municipality.

The Deputy Minister of Justice for Human Rights said that other parts of the country seem to be doing particularly terribly in this regard, with a high number of child labourers in Razavi Khorasan and Sistan & Baluchestan. He described the situation in these two provinces as “catastrophic”. Although he was unable to provide any figures, he said that the government statistics are certainly far from being accurate.

#Iran is seeing a steep increase in child labor. While unemployment is rampant across the country, more children are joining Iran’s workforce, roaming the streets of large cities, begging, or selling goods.#Povertyhttps://t.co/ggNwNZe4xK

For many years in Iran, the worsening economic conditions have made life very difficult for many Iranians. Poor families with children, and of course, homeless families, have no way to make ends meet and become extremely vulnerable to exploitation. One of the worst things about the situation is that regime officials are making the most of the situation and seeing this as an opportunity to make massive financial gains. Hundreds of dollars will go to the criminals, with mere cents being paid to the child.

And it is not just homeless and extremely poor families that are affected – other modest families are finding it increasingly difficult to afford to send their children to school, resulting in many leaving education.

Periodic reminder:
Seven million of #Iran's children are forced into work before they are legally able to.https://t.co/02Lonhl7ZE

And the regime provides for:

The rights of children in Iran are not respected by the Iranian regime. Despite being bound by legal obligations and international conventions, the regime pays very little attention to the problems faced by the children of Iran and many are given the worst start in life through circumstances beyond the control of their parents.

Half-hearted measures have been taken in the past but they have not been sufficient. The problem boils down to economic issues and until the situation improves in this respect, we will continue to see many children working on the streets of Iran’s towns and cities.

The mullahs’ detested policies have created tremendous discontent in #Iran particularly among the younger generation, turning every school and university into a powder keg ready to explode. #FreeIran

Mrs. Maryam Rajavi the President-elect of the National Council of Resistance of Iran’s (NCRI): The population of child workers has exceeded 7 million. Instead of going to school, they are put to work under torturous conditions for 12 hours. The conditions of child labourers are tantamount to organized crime by the clerical regime in Iran.