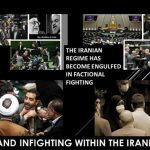 Written by Mohsen Aboutalebi on October 30, 2020. Posted in NEWS

(PMOI / MEK Iran): Khamenei, for his part, is mounting a last-ditch effort to stem the increasing opposition within Iran and consolidate his power. The regime is disintegrating before the Supreme Leader’s very eyes.

Iran’s Supreme Leader Ali Khamenei recently warned his faction of “hardliners” over regime infighting and the threats made against “reformist” President Hassan Rouhani, specifically to impeach and execute him.

the National Council of Resistance of Iran’s (NCRI), and the People’s Mojahedin Organization of Iran (PMOI / MEK Iran), announced that the Coronavirus death toll in Iran had surpassed 136,300.

Maryam Rajavi, the leader of the Iranian Resistance, spoke out again about the increasing number of patients and victims. She called it the “direct outcome of the inhumane policies of  Supreme Leader Ali and President Hassan Rouhani”.

After eight months of quarantining himself away – not spending a dollar of his stolen billions to help the Iranian people cope with the effects of the pandemic – Khamenei met with the National Covid-19 Task Force. There, he appeared to tell his goons in the parliament that they had to stop insulting Rouhani “in the sensitive last year of the government” in order to prevent damage to “the country’s important issue”.

Infighting by regime officials over the major failures. The visible arguments, which are occurring in parliamentary sessions, demonstrate the weakened state of the regime, after mounting pressure and corruption has created conflict and division. #MEK #Iran #FreeIran2020 pic.twitter.com/fKZTKNiFfg

The translation is that officials were warned against making the rift at the top of the regime bigger as this could lead to an uprising and bring the regime down, especially given that the coronavirus and the related death toll has only increased the restiveness of the society.

The regime is actually using the virus as a barrier to widespread protests because they figure that people will be too scared of catching a deadly disease to come to the streets. They’ve even reopened the economy too soon, which contributed to the spread of the virus. Meanwhile, Khamenei shifted the burden of responsibility for helping Iranians onto “philanthropists”.

#Iran: The infighting by the #Iranian regime’s rival factions has reached new heights. These infightings indicate the regime’s and society’s critical situation.#NoImpunity4Mullahs https://t.co/aXQ8i6ux3u

Saturday’s meeting, according to the Iranian Resistance, NCRI and (PMOI / MEK Iran) was less about the pandemic than preventing uprisings, given the participants, including:

This comes just days after two 37-year-old men were killed in the streets by police, including Mehrdad Sepeheri who was pepper-sprayed and suffocated in Mashhad, and Mohsen MinBashi who was shot in northeast Iran.

The National Council of Resistance of Iran (NCRI) wrote: “The regime has tried to intimidate the public. Yet, people’s reactions and the current situation of Iran’s society have forced the regime’s officials to step back from their actions… Two factors have terrified Khamenei and his regime. The first factor is people’s increasing knowledge and anger at the regime’s role in spreading the virus across Iran and sending people to the COVID-19 minefield, which has added to the society’s restiveness.

The second factor is the COVID-19 crisis itself, coupled with people’s poverty and the economic pressure they are enduring. Most importantly, the regime has refused to help people during the pandemic.”