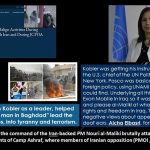 MEK Iran: The United Nations Is Not What We Think it Is

Written by Mohsen Aboutalebi on October 5, 2020. Posted in MEK (PMOI) IN MEDIA 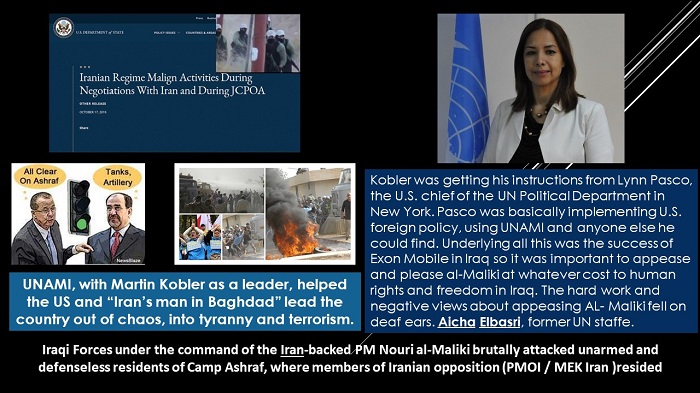 On July 28-29, 2009, Iraqi forces under the command of the Iran-backed PM Nouri al-Maliki brutally attacked unarmed and defenseless residents of Camp Ashraf, where members of the  (PMOI / MEK Iran) resided.

She resigned from her position eventually because her dreams of the United Nations being a leader in making the lives of the most oppressed people were shattered by the goings on and trivial activities United Nations members were engaging themselves even attending drunken parties and returning to their seats to make crucial decisions about the most abused people in the world.

Another reason why the UN staffer resigned was in relation to the UNAMI staff who worked tirelessly within Iraqi civil society to record and publicize the following:

Unfortunately, this hard work was not rewarded, but UNAMI itself was blocking it and while working to increase people’s rights and freedoms in Iraq, UNAMI at the same time was supporting the US supported Shiite Prime Minister Nouri al-Maliki, the key agent for human rights violations in the country while also being the primary obstructor for good governance.

UNAMI, with Martin Kobler as a leader, helped the US and “Iran’s man in Baghdad” lead the country out of chaos, into tyranny and terrorism. Not long after he took up his position in October 2011 he said at a meeting the following words: “Al-Maliki said that the only thing he wanted UNAMI to do in Iraq is to help shut down Camp Ashraf. And this is what we are going to do.”

Therefore on July 28-29, 2009, Iraqi forces under the command of the Iran-backed PM Nouri al-Maliki brutally attacked unarmed and defenseless residents of Camp Ashraf, where members of the Iranian opposition the People’s Mojahedin Organization of Iran (PMOI / MEK Iran) resided.

Collaborating with the then Iraqi government, Nouri al-Maliki administration, the terrorist Quds Force was in charge to conduct the attack on Camp Ashraf in 2013https://t.co/GP4O7wBU54#MEK #Iran #FreeIran @USAdarFarsi pic.twitter.com/RcY6dCmEHx

Al-Maliki wanted the group of 3,400 unarmed Iranian dissidents (PMOI / MEK Iran), to leave the camp, where Saddam Hussein, who had a death warrant signed by Al-Maliki in December 2006, had been host to them since 1986. Maliki wanted them to be transferred to a place close to Baghdad’s International Airport, and then thrown out of the country.

Kobler was getting his instructions from Lynn Pasco, the U.S. chief of the UN Political Department in New York. Pasco was basically implementing U.S. foreign policy, using UNAMI and anyone else he could find. Underlying all this was the success of Exon Mobile in Iraq so it was important to appease and please al-Maliki at whatever cost to human rights and freedom in Iraq. The hard work and negative views about appeasing AL- Maliki fell on deaf ears.

When UNAMI and UNHCR were transferring the People’s Mojahedin Organization of Iran (PMOI / MEK Iran), from Camp Ashraf to Camp Liberty, Al-Maliki grabbed power thanks to Iran’s scheming and the consent of President Barack Obama’s administration. Basically, the UN and Kobler turned a blind eye when the US offered Al-Maliki free rein to do the following:

Aicha Elbasri was not only appalled by the UN Security Council in Iraq but similar contradictions were going on in Dafur where she was sent to work as a staffer. The UN never tried to stop al-Bashir and his Janjaweed death squads, who were integrated into the armed forces, from killing civilians.

These two incidents are just the tip of the iceberg when it comes to the role of the UN Security Council.