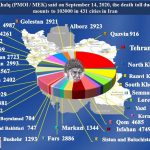 Written by Amineh Qaraee on September 15, 2020. Posted in NEWS 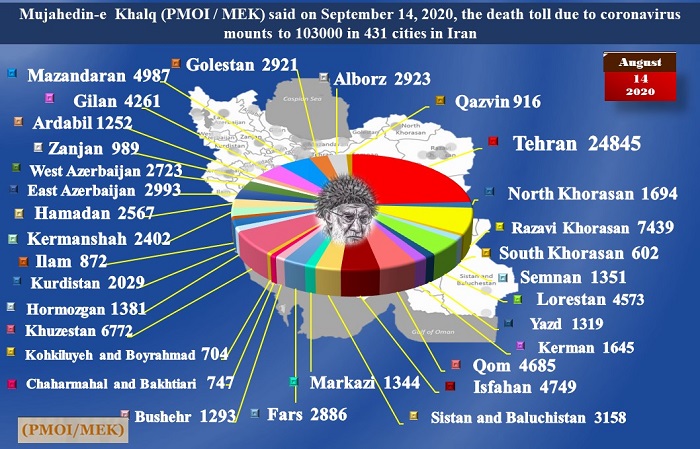 The mullah’s regime is still concealing the reality of the situation, reporting that the death toll is 23,313. This is about a fifth of the figure reported by the MEK and is just further proof that the Iranian regime cannot be trusted.

The health crisis in Iran continues to worry many. Every day, hundreds of more deaths are being reported and more and more parts of the country are being classed as “red zones” where the virus is in high circulation.

The People’s Mojahedin Organization of Iran (PMOI / MEK Iran) reports that more than 103,000 people in Iran have died after contracting the virus. Every single province has had thousands of deaths reported, and 431 cities have been noted as dealing with cases.

Over 103,000 people have died of the novel #coronavirus in 431 cities checkered across all of #Iran’s 31 provinces, according to reports tallied by the Iranian opposition PMOI/MEK as of Monday afternoon local time, September 14.https://t.co/APeaX9Uw2S

The Iranian regime is still concealing the reality of the situation, reporting that the death toll is 23,313. This is about a fifth of the figure reported by the (PMOI / MEK Iran), and is just further proof that the Iranian regime cannot be trusted. The death toll in Tehran alone is more than the figure reported by the regime for the whole country.

A spokesperson for the Ministry of Health has said that 13 provinces are now classed as red zones, with 15 presenting great concerns. Furthermore, 88 cities are classed as red zones, and 90 other cities are yellow or white, meaning that the situation there is worrying enough for much caution to be advised. In fact, the spokesperson indicated that not a single city in the country can be considered as being a “green zone”.

A member of the National Coronavirus Tack Force Minoo Mohraz said at the weekend that the county has been entering a new peak since June and that the virus is mutating and spreading at a faster rate. Ms. Mohraz said that “without a doubt, any gathering can make the situation even worse” and that any gathering is “considered a violation of social distancing”.

It has been reported that an eight-year-old has died in the province of Khuzestan. This is concerning news, especially now that more and more children are returning to schools that have reopened.

“Following the economic crisis and the devaluation of Rial, the government, by choosing the strategy of collective…

Speaking about the scale of the health crisis and the reality of the situation, a member of Tehran City Council pointed out that almost 15 million students across the country and 2 million in Tehran will be attending classes and it will still be a “human catastrophe” if one percent of these young people contract the virus.

Shahrbanu Amani also pointed out that President Hassan Rouhani has no plans to actually attend any of the schools in person – just several “virtual” appearances at the inauguration ceremonies of universities. Amani added: “Never in times of crisis had we had consistent management or a centralized command or unified instructions for crisis management, and the people are confused.”

Indeed, the people are confused, but they are also angry at the regime’s mismanagement of the situation. Since the very beginning of the outbreak, the regime has lied to and deceived the people. It has outright denied the virus was present in the country so that attendance would not be affected at the sham parliamentary elections. The gravity of the situation has been downplayed and many top officials have completely ignored the human cost of this spiraling health crisis.

#Iran: The staggering #Coronavirus death toll in 427 cities exceeds 100,000- This tragedy is the result of Khamenei and Rouhani's policies. They will cause a greater tragedy by reopening schoolshttps://t.co/ZtOseHoC8D pic.twitter.com/dx9zzzuV2T

The tragic coronavirus pandemic has cast a dark shadow over our nation for the past seven months. Khamenei, Rouhani, and the gangs ruling our country do not spend even a small portion of the hundreds of billions of dollars they have usurped from our nation.