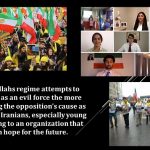 Iran’s Youth are Turning Increasingly to the MEK

Written by Yoosef Lesani on September 13, 2020. Posted in NEWS, PMOI/MEK Support in Iran 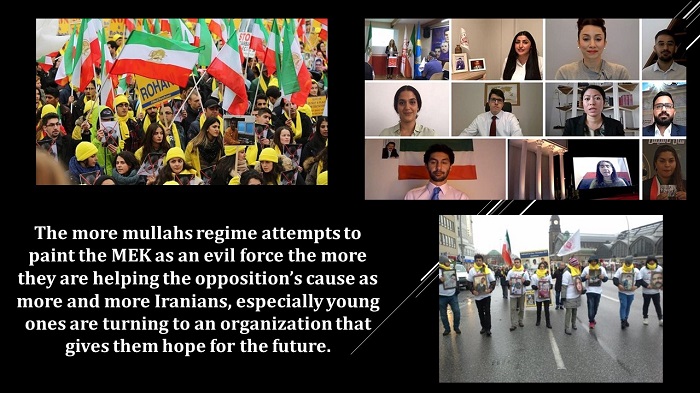 Many young people spoke for themselves and others in Iran about their support for the MEK and their enthusiasm for seeing a real alternative to the mullahs’ regime.

Iran’s theocratic and decidedly unsavory regime has been hoping that a policy of ruthless repression and outright lies about the Iranian opposition, especially the People’s Mojahedin Organization of Iran (PMOI / MEK Iran) will somehow pay off. This strategy is not succeeding and the more the regime attempts to paint the MEK as an evil force the more they are helping the opposition’s cause as more and more Iranians, especially young ones are turning to an organization that gives them hope for the future.

The recent online event organized by The National Council of Resistance of Iran (NCRI) to commemorate the 55th anniversary of the founding of the MEK saw thousands of supporters and members take part from over 300 different Iranian associations. Many young people spoke for themselves and others in Iran about their support for the MEK and their enthusiasm for seeing a real alternative to the mullahs’ regime.

The following are extracts from the conference illustrating some of the sentiments of the participants.

Two professionals and long time supporters of the MEK, Virginia USA based Soulmaz Abu and Sweden based Hanifeh Khayeri, explained just what it was that attracted them to the MEK.

Soulmaz said  “I left Iran when I was very young. We had to leave the country because my parents were supporters of the MEK. “The MEK has put aside everything for the freedom of the Iranian people. The sacrifices they have made, the pressure they have endured, all this persistence is due to their faith in freedom in Iran. Is there anyone else who is so devoted? They believe in free elections, freedom of women, the abolishment of the death penalty, and a non-nuclear Iran.”

SOULMAZ ABU ALI Ph.D. in International Relations #Iranian Community in Virginia The #MEK has put aside everything for the freedom of the Iranian people. The sacrifices they have made, the pressure they have endured, all this persistence is due to their faith in freedom in #Iran. pic.twitter.com/bpKWd69XBM

Hanifeh’s mother was one of the 30,000 MEK members and supporters who was executed in 1988. She said: “It is true that I know the organization since I was a child, but this is not the reason for my activity. I went to know about this resistance myself and I consciously chose to support and help this organization. I support the MEK because it has values that are found nowhere else. They have all gathered for a common cause: freedom for the people of Iran. I haven’t seen similar potential anywhere else in the world. We are all on the same path. Iran is one of several dictatorships in the world. But the Iranian people have an organized opposition movement that has stood for 55 years and has only grown stronger and firmer in their ideals.”

HANIFEH KHAYERI Researcher, “We are all on the same path. #Iran is one of several dictatorships in the world. But the #Iranian people have an organized opposition movement (#MEK)that has stood for 55 years and has only grown stronger and firmer in their ideals.” pic.twitter.com/GBmHRTVs2r

Dentistry designer, Ali Fatemi, also a representative of the Iranian Youth Association in Luxemburg, said that he left Iran in 2009 after the uprising in that country was brutally repressed. He said: “I want to testify that after I left Iran I found that the only voice outside the country that cries out tirelessly for the realization of the rights of the Iranian people is the voice of the MEK and the Iranian Resistance. Anyone serious in bringing freedom to Iran will find themselves at the sides of the MEK.”

Ali Fatemi Iranian Youth Association in Luxembourg
The #MEK is the voice of the Iranian people, which relentlessly struggles for freedom. Anyone who is serious in bringing freedom to Iran will find themselves at the sides of the MEK. #Iran pic.twitter.com/MQDlhqryT2

An Iranian insurance expert, Ehsan Ayatollahi, a representative of the Human Rights Association for Victims of Fundamentalism from Austria, said that there was no other movement that believes in secularism as much as the MEK.

Ehsan Ayatollahi Insurance expert “The real democratic Islam of the #MEK is terrifying for both the Shah and the mullahs’ regime. Today, the regime’s front organizations that pose as oppositions try to attack the MEK’s ideology and interpretation of Islam. #Iran pic.twitter.com/7TUKZL95u2

Australian student, Roxanna Sadeghpour, born to Iranian parents, said that the MEK fought for freedom, and one day she hoped that she could return to a free and democratic Iran.

Roxanna Sadeghpour Student, Australia “I was never in Iran, but my heart is with my people and I wish to see them one day. I know that #MEK fights for freedom and human values. They have sacrificed all they have to bring freedom to their people. #Iran pic.twitter.com/szUW1VidEd

An Iranian interpreter Ghazal Afshar, now based in Italy said that her father was killed by the regime when she was a small child. Her parents “made their choice because they wanted millions of children to have the same opportunity that I have,” she said.

My mother is in #Ashraf3, and my father was killed by the regime. I was inspired by many people like my parents, who gave up their personal lives to fight for their people's rights—Ghazal Afshar, interpreter, Iranian Specialists and Graduates in #Italyhttps://t.co/ObVaftsqmq

Another young supporter and representative of the Youth Uprising Support Association in Norway, Sana Sotudeh, said that she was inspired by the MEK’s perspective on the role of women.

Sana Sotudeh Bachelor of Social Work, Youth Uprising Support Association, Norway “In MEK, women are in leadership roles. #MEK #Iran has proven that women have the power to lead and will change the world.” pic.twitter.com/1F9XnuYBVG

A student from the Netherlands said that she had become a MEK supporter because of the sacrifice they had made. “They have chosen to give up everything they have to make sure everyone in Iran will have the opportunity to live in freedom. I also admire their justice. They believe in inequality. They have undergone many difficulties, but they have never wavered in their sincerity. The name of the MEK will forever remain in Iran as an example of freedom,” she said.

Many regime officials have voiced their fear of the growing influence of the MEK within Iran. Even Supreme Leader, Ali Khamenei, has acknowledged that the MEK is a significant threat to the regime. His speech to the Basij militia back in May this year showed that he understood that Iranian students, in particular, were rejecting the authority of the mullahs and their tired rhetoric and demanding an alternative.

Khamenei in his speech said “You should not allow the enemy to take advantage of your protests. They are waiting to use any such opportunity… The enemy will portray your protests over whatever subject as dissent against the state, and provide such an image to their viewers…”

Meanwhile, as the mullahs are growing more and more fearful, the MEK’s resistance units, mainly young Iranians, are finding their way to continue to ramp up their protests, despite the very real threat posed by regime forces of arrest and imprisonment.