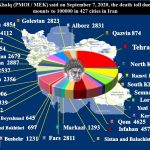 Written by Amineh Qaraee on September 8, 2020. Posted in NEWS 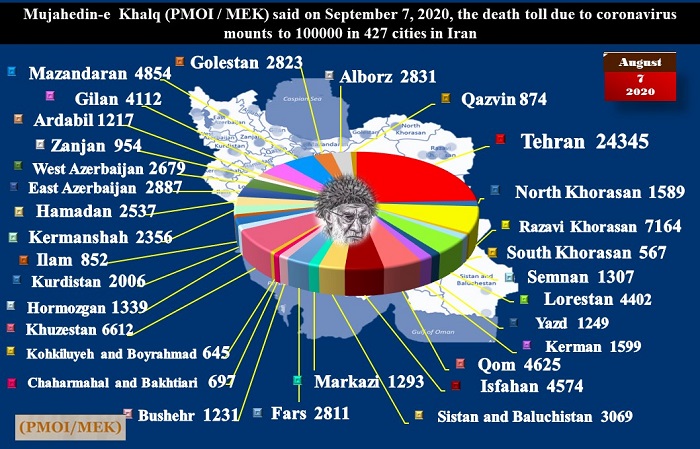 Over 100,000 people have died of the novel coronavirus in 427 cities checkered across all of Iran’s 31 provinces, according to reports tallied by the Iranian opposition People’s Mojahedin Organization of Iran (PMOI / MEK Iran).

The COVID 19 outbreak in Iran according to reports tallied by the Iranian opposition People’s Mojahedin Organization of Iran (PMOI/MEK) has now resulted in 100,000 deaths. How could such a high death rate have been prevented? From the start of the pandemic, the mullahs refused to admit how serious it was and have continually downplayed its tragedy to the Iranian people. It has used the force of the Revolutionary Guards (IRGC) to ensure the truth of the pandemic has been concealed from the people. There are so many things the regime failed to do, such as:

The Health Minister made constant appeals from the start of the pandemic for more funding and by June the amount allocated per person was a paltry 3.5 Euros. As the pandemic worsened, the mullahs did not stop the launch into space of expensive satellites. Also, it still invested money in nuclear activities and continued its terrorist attacks on Syria and Iraq.

The only way the mullahs could survive economically was to force people to return to their workplaces so they could continue with making a living. All throughout the pandemic, there has been no unity between the people and the state, and the whole pandemic was addressed in such a way that the people were too scared to protest about the way they had been treated.

Morgues and cemeteries throughout the country are full. This reminds the citizens of how serious the pandemic is. The way the people evaluate the mullahs’ approach to the pandemic means there will be, sooner rather than later, further uprisings, showing the incompetence of the regime to handle any issues related to the people.

Mrs. Maryam Rajavi, the President-elect of the National Council of Resistance of Iran (NCRI), has observed over the last few months the whole catastrophe caused by the pandemic. She believes many of the deaths from COVID-19 could have been avoided. She said that the massive death toll was all due to the inhuman and criminal policies pursued by the mullahs. They are now bringing about a more massive catastrophe by telling children to go back to school. She said that through these difficult times hardly any money held by the regime was used to help the people and families who have endured exposure to COVID-19. Also, the hardworking nurses and healthcare staff who dedicated themselves 24/7 to help get victims through the crises.

Mrs. Rajavi stated that opening schools soon would silence the people as they see the virus spread causing more and more casualties. In her comments about this report on social media Maryam Rajavi says:

‘’The tragic coronavirus pandemic has cast a dark shadow over our nation for the past seven months. Khamenei, Rouhani, and the gangs ruling our country do not spend even a small portion of the hundreds of billions of dollars they have usurped from our nation.’’