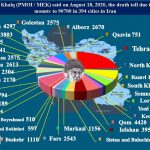 Written by Mohsen Aboutalebi on August 19, 2020. Posted in NEWS 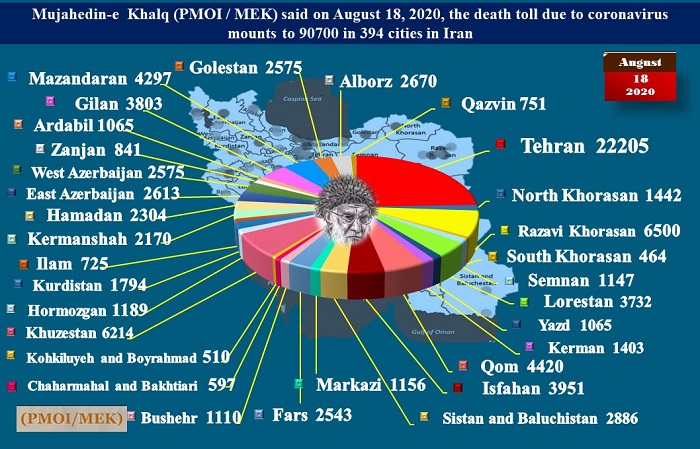 (PMOI / MEK Iran), has been recording the number of deaths due to Coronavirus in the country surpasses 90,000.

The main opposition to the Iranian regime, the People’s Mojahedin Organization of Iran (PMOI / MEK Iran), has been recording the number of deaths due to Coronavirus in the country. It tasked itself with this because it knew that the Iranian regime could not be trusted to be open and truthful about the reality of the situation.

The (PMOI / MEK Iran) has reported that as of Tuesday 18th August, more than 90,700 people have died after contracting the virus. Proving that it cannot be trusted to be truthful about the situation, the Iranian regime is reporting that the death toll for the whole country stands around 20,000 – a mere fraction of the death toll established by its opposition (PMOI / MEK Iran).

More than 90,700 people have died of the novel #coronavirus in 394 cities checkered across all of Iran's 31 provinces, according to the Iranian opposition PMOI/MEK.

Every province has seen cases, spread over 392 cities. The (PMOI / MEK Iran) has split the death toll out by province and an interactive map can be seen on the organization’s website.

Many are warning the government that the situation risks spiraling out of control if urgent measures are not taken. The Deputy Minister of Health Alireza Raisi said on Saturday 15th August that there could be “reputable damages” if the annual mourning ceremonies this month take place in indoor locations.

Many scientific and medical experts have also warned that the number of people requiring hospitalization is on the rise and that many places across the country face a shortage of beds. The dean of Sarab Medical Sciences University in Eastern Azerbaijan said that this is the case in that part of the country, indicating that a shortage of beds could become a reality in just a few days.

According to the head of the National Emergency Organization, there has been a huge rise in the number of emergency calls since the beginning of the pandemic. The head said that the volume of calls has quadrupled and that workers for the organization have been on “full alert” and unable to take leave. He also indicated that 1,900 of their workers had contracted the virus, with four losing their lives.

With regards to the situation in the province of Fars, the deputy dean of the Medical Sciences University in Shiraz said on Sunday that 12 people died in the previous 24 hours. Furthermore, the deputy dean stated that for every three tests carried out, one is positive. The province is currently dealing with a large number of cases and several cities, including Shiraz, are in red status.

Over 90,700 people have died of the novel coronavirus in 394 cities checkered across all of Iran’s 31 provinces,…

The Provincial Coronavirus Task Force recently ordered the closure of Arak Cemetery to the public, according to the Arak Cemetery Organization director. He said that on Monday the measures had been finalized and entrances are now inaccessible.

Mrs. Maryam Rajavi is the President-elect of the National Council of Resistance of Iran’s (NCRI): The abnormal surging trend of the number of coronavirus victims in Iran is a product of the criminal policies of Ali Khamenei and Hassan Rouhani.

The abnormal surging trend of the number of #coronavirus victims in #Iran is a product of the criminal policies of Khamenei and Rouhani. pic.twitter.com/TnCBCiRZEc