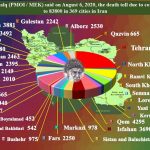 Written by Mohsen Aboutalebi on August 7, 2020. Posted in NEWS 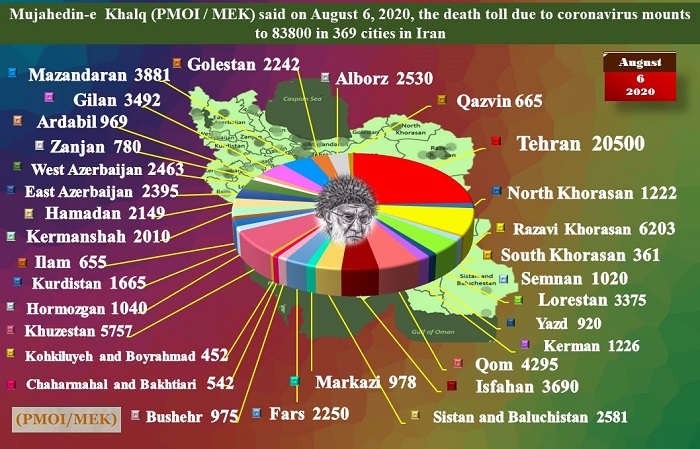 The Iranian opposition organization, the People’s Mojahedin Organization of Iran (PMOI / MEK Iran) has tallied the number of fatalities in Iran caused by the Covid-19 outbreak and has reported that more than 83,800 people have died. The Iranian regime’s official figures, as usual, are under-reported at 17,976.

Iran: Coronavirus Fatalities in 369 Cities Exceeds 83,800
The People’s Mojahedin Organization of Iran (PMOI/#MEK) announced on Thursday, August 6, 2020, that the #Coronavirus fatalities in 369 cities across #Iran have surpassed 83,800. #COVID__19 https://t.co/JBywSlaJ89

A snapshot of the provincial death count is as follows:

A Health Ministry spokesperson said that 4,156 people were in ICU with 174 people have died in the last 24 hours. 26 of Iran’s provinces had been declared as red zones, she said. She added that the early success in Qom has now been reversed and there has been a constant rise in numbers of infections and deaths from the disease. Qom is a red zone.

More than 83,800 people have died of the novel #coronavirus in 369 cities checkered across all of Iran's 31 provinces, according to the Iranian opposition PMOI/MEK.

The deputy dean of Qom Medical University said that the medical staff in Qom were under huge pressure and constantly fatigued. “We have an increasing trend and are considered a red zone. The number of dire patients is increasing.

The growing number of people entering hospitals and being hospitalized in Qom is a warning… Currently, the possibility of Covid-19 tests returning as positive has reached 49 percent,” he said.

The governor of Qom said that restrictions would have to resume in Qom if the situation did not stabilize soon. He emphasized that the medical staff had all been working extremely hard ever since the outbreak began.

The Hormozgan Medical Sciences University issued a statement on Thursday saying that another seven patients had died from Covid-19 in the last 24 hours. The death toll now stands at 577 in Hormozgan.

The dean of Bobol Medical Sciences University in Mazandaran said that the spread of the virus had increased by a factor 10 in that province. He urged locals not to make unnecessary trips as it helped to spread the disease more quickly.

The head of Isfahan’s Kashan Health and Treatment Network said that the virus was being transmitted 7 times faster than earlier in the year.

The real death toll in Iran from coronavirus infection over 83,000, although the official total supplied by the regime…

The Medical Center Board of Directors in Yazd Province issued a statement saying “our colleagues in hospitals and other medical centers have been with enormous sacrifice providing treatment to Covid-19 patients for five months now. It is completely natural that they are fatigued and if the status quo continues they will not be able to continue their efforts.”

Mrs. Maryam Rajavi the President-elect of the National Council of Resistance of Iran’s (NCRI): The unprecedented spike in COVID-19 across Iran and the regrettable number of victims are entirely the results of criminal policies pursued by Khamenei and Rouhani.