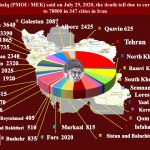 Written by Mohsen Aboutalebi on July 30, 2020. Posted in NEWS 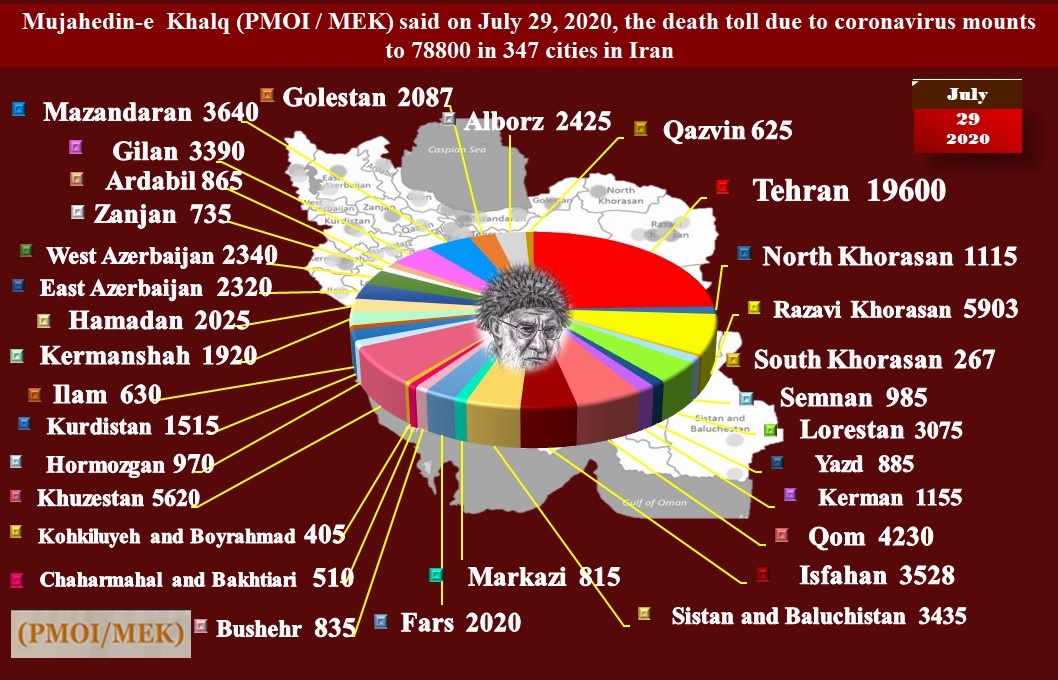 The MEK reported on Wednesday that more than 78,800 people in 347 cities from all 31 Iranian provinces have lost their lives from Covid-19.

The MEK reported on Wednesday that more than 78,800 people in 347 cities from all 31 Iranian provinces have lost their lives from Covid-19. The Iranian regime has confirmed 16,343 of these deaths or approximately one-fifth of the actual total.

According to the semi-official ISNA, Deputy Health Minister Alireza Raisi said this week, “Only 37 counties of the country 457 are white, 105 are yellow, and the rest are orange or [code] red.”

The Deputy Dean of the Medical Sciences University in Fars Province on Monday confirmed 19 new fatalities in 24 hours, according to a report from the Ministry of Intelligence and Security (MOIS)-affiliated Mehr news agency. This is the highest number of single-day coronavirus deaths since the pandemic reached Iran.

Deputy Health Minister Iraj Harirchi told state television on Tuesday that 73 million of the country’s 83 million citizens were living in code red conditions. “But the real disaster is in Tehran, which is in third place in cases and deaths. Since the number of coronavirus cases and hospitalized patients is increasing, there’s a possibility that the death rate will also increase in the next two weeks,” he added.

On Tuesday, Channel 5 Television quoted Mohsen Bandpey, the provincial governor of Tehran, who explained the reason for the crisis in Tehran. “I declared two weeks ago that we should consider Tehran’s yellow state as red. We now have around 4,500 hospitalized patients, and 40 percent of the country’s critical patients are in Tehran… After we eased our policies and lifted travel restrictions, the result is what we’re seeing today.” The MEK previously reported on Rouhani’s premature decision to relax coronavirus restrictions and force Iranians to return to work.

Regime leaders have been forced to acknowledge the growing crisis in Iran, but they refuse to take responsibility for their role in the situation. In a Wednesday cabinet meeting regime, President Hassan Rouhani turned to a familiar target to deflect blame.

The state-run IRNA reported Rouhani’s criticism of the MEK during the meeting. “Earlier this year despite the Covid-19 outbreak the enemy was interested in the war among our different factions and differences, he said, adding, “To those who want to cancel the upcoming religious mourning rituals, they should know that these gatherings will not be canceled. To those who want to undermine these mourning ceremonies by claiming such gatherings will escalate the illness wave, they will not be allowed to do so.”

Rouhani is referring to a statement from the National Council of Resistance of Iran (NCRI) President-elect Mrs. Maryam Rajavi calling for the cancellation of Ashura ceremonies, in light of coronavirus concerns. Mrs. Rajavi pointed out that the yearly Hajj pilgrimages have been canceled.

She tweeted: “The decision by Khamenei and Rouhani to hold mourning ceremonies of Moharram, is another instance of the mullahs’ demagoguery, deliberately sending people to their death. This is while the Hajj pilgrimages were canceled for the first time to protect the lives of Muslims.”

More than 78,800 people have died of the novel #coronavirus in 347 cities checkered across all of Iran's 31 provinces, according to the Iranian opposition PMOI/MEK.

Deputy Health Minister Iraj Hairichi chimed in with his criticism of the MEK in remarks carried on the Revolutionary Guards-affiliated Quds news agency on Wednesday. Despite his acknowledgment of the “disaster” facing Tehran and the rising number of code red cities, Harirchi said, “Follow the propaganda trail and you will realize the origin. Some people are seeking followers and some others are busy in Albania pumping propaganda, and they seek to disrupt our calm status.”

He added, If we carry out the end of the year exams, some will say don’t do so; if we do not take these exams, they will say the entire country is falling apart that they can’t take these tests. Therefore, we need to be careful to not play their games and do what is in the interests of our country.”