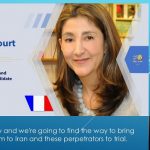 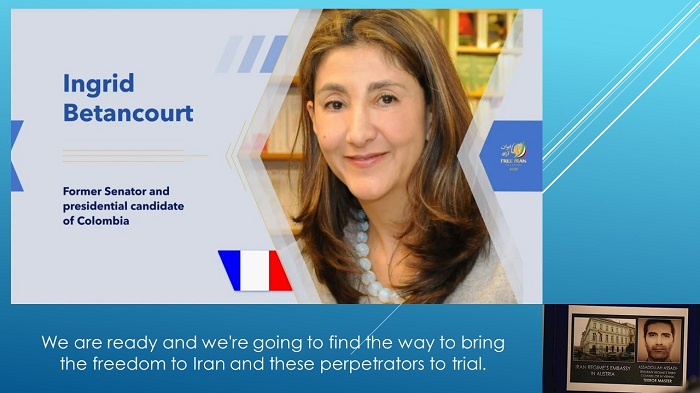 Dear friends, let me begin saluting the young people and the fighters, the freedom fighters, that are taking all the risks in Iran to end the tyranny of the mullahs. All these young people, all these men, and women that we see fighting in the streets every day, are making the tyranny crumble. And they have been told from a very young age that the world is their enemy, that they have to fight because Iranians have only enemies worldwide. But you see, with this display of technology that we owe to the MEK, to the NCRI, we have seen the whole world united, united for you. United to support your struggle. United to tell you that you’re not alone, that we admire you, that we are with you.

Former Presidential Candidate of Columbia Íngrid Betancourt at #FreeIran2020 conference: We are all united from around @Maryam_Rajavi because we believe she is the only one who can guarantee Iran's people that they will not be betrayed again.https://t.co/BsE4BtXmgf

And of course, the mullahs want to convince the people of Iran that they are only enemies and that they are forced into war because as Adrianus Melkert was explaining, behind this is the greed, is corruption. And we know that a war is always very important and comfortable to hide corruption. So, the mullahs are using the war to steal from the Iranian youth their time, their prosperity, their opportunities. And most of all, they are using God to do evil. We are witnessing this evil every day. But we are also witnessing a beacon of light. You see, what impresses me today is that with this digital display and amazing technology that we are experiencing through this webinar, worldwide webinar, we are witnessing that we are united.

And the voice who is uniting us, the heart that is uniting us, is Maryam Rajavi. She is the one that inhabits the history of the democratic struggle in Iran. She was talking about (Moussadech) in 1962 and all the struggle to bring democracy to Iran. Well, you see, I think it’s very important to understand that the reason why we are all united all over the world from all ideological backgrounds, from all cultures and religions, and we are all united together around Maryam, it’s because we believe that she’s the only one that can guarantee to the Iranian people that they will not be betrayed again.

You see, we know that the tyranny is crumbling. We know that this is the fall. We know that we are experiencing the messages, the first indicators of this fall of the regime. But it would be a disaster if there was no one to guide the energy for freedom and peace and justice of the Iranian people if there was not a leader with the principles, the values, of Maryam. She said in her address today she said that she will never cling to power. This is not a power struggle. This is a struggle for democracy. This is a struggle without any violence, without any bullets, but with principles and values.

So, you see, we are united in a very special moment today because two days ago on July 15th began the trial of Assadollah Assadi. The terrorist diplomat who plotted to kill us all in the rally we had in Paris on June 30th, 2018. And this is very important because what we’re seeing is that it’s not only that we are united. After all, in abstract we want to fight for the freedom of Iranians. No. It’s because we are all interrelated in the same fight. Today we that are here in this rally, in this webinar, we are also the potential victims of a mad tyranny that is capable of thinking of blowing all us up to cling to power, to cling to greed, and to achieve this expansion of tyranny that is part of their plan. We are all together in putting a stop to this madness.

Wednesday marked the beginning of the trial of four #Iran-linked terrorist, including a senior diplomat in Vienna. Assadollah Assadi & two of his cohorts are on trial for a bombing attempt in 2018, targeted an annual opposition convention.#Terrorismhttps://t.co/6dskoa8wnV

And Assadi is important because Assadi was the main planner of the plot. And it was not only the plot of Villepinte, it was during decades, the one who was plotting the regime’s assassinations and killing abroad. He’s a terrorist. He was of course hiding or covering himself as a third consul of the Iranian embassy in Austria. But the governments of Europe already knew that this guy was a terrorist, and they were following him. And they could see how he drove to Luxemburg personally and he delivered on June 28th, 2018, a high-powered bomb to two people, Amir Saadouni and Nasimeh Naami, both were Belgian citizens but both had been paid to put a bomb that would have killed us all, all of the people, like I was there, all the people that were attending that conference on that day. But you see, the thing is that this very sophisticated terrorist plot was neutralized in its last stage because Saadouni and Naami were arrested in Belgium while transporting the bomb to Villepinte. And Mehrdad Arefani was arrested when he was already in Villepinte and he had managed to infiltrate the quarters where we were. He was sitting beside us. And he was arrested in Villepinte. And Assadi, Assadoullah Assadi, the high official, the diplomat, was captured in Germany.

Now, based on documents that are made public, it has been proven that Khamenei personally ordered these plots to be carried out. The French government in October 2018, publicly accused Iran of having sponsored the project. And then Iranian assets were frozen and an Iranian spy acting under diplomatic cover in Paris was expelled. But you see, the thing is that according to official sources, French official sources, the response from France was far from being significant, since there were no important Iranian assets in France at the time. And what we have seen is that over the past two years, the mullahs’ regime has spared no effort to prevent Assadi’s trial and more than that to have him released. So, they have come doing things like of course diplomatic pressure, economic promises. But worst of all, they have taken hostages, European nationals including French and British nationals, to try to bargain. And this has been resulting in incredible pain for the families of our fellow citizens. So that’s why the struggle of Iranians has become our struggle. We are the potential victims like you are victims in Iran of the madness of these mullahs.

Assadollah Assadi's trial begins today in ?? The 1st time a diplomat from Iran is tried in Europe
This is not just the prosecution of 1 terrorist. It's the prosecution of the world's #1 state sponsor of terrorism #ExpelIranDiplomatTerrorists #FreeIran2020https://t.co/NIuau7sicM pic.twitter.com/RPYr25dsEB

And I speak as a potential victim, and I’m grateful for the independent and courageous investigation done by the Belgian courts and for the trial that has started. But I have to confess that as a European citizen, I feel humiliated by this let’s pretend to be tough diplomacy that is turning a blind eye to the suffering of the people of Iran, that is giving leeway to Iranian terrorists in our countries, putting all of us at risk. So, therefore, in addition to Assadi’s trial, I am demanding that the real sponsors are tried too by international courts. And I’m talking first of Khamenei, second of Rouhani, third of Zarif, and I’m also including Alavi the minister of intelligence under which the plot was ordered.

And I’m going to say something that is I think resonates in all our hearts. In the same way, we won’t settle for less in obtaining the freedom of Iran, the democracy and the justice, the ten points, the program that Maryam Rajavi, my friend that I admire and salute today as an amazing leader for the world, a woman leader in this world, as we are following you in not accepting any less for Iranians, we are not accepting any less for us in putting all these four men into the trial as the perpetrators of all these crimes. And as we are all saying today because this is our cry of uniting all together: Hazer, hazer, hazer.

We are ready and we’re going to find the way to bring the freedom to Iran and these perpetrators to trial.