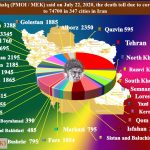 Written by Mohsen Aboutalebi on July 23, 2020. Posted in NEWS 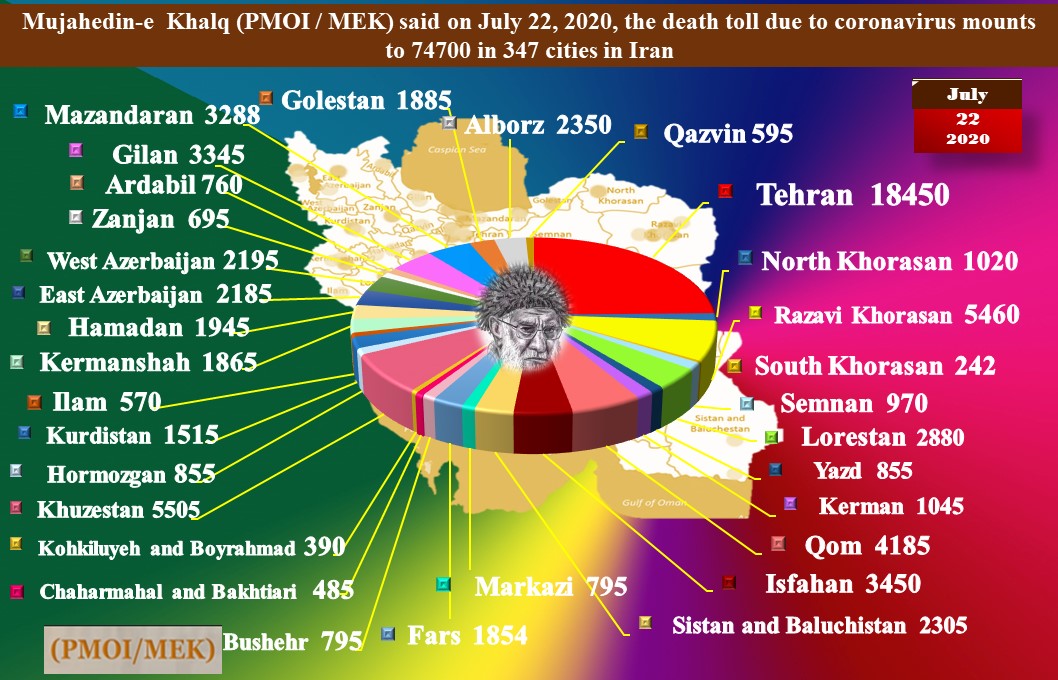 MEK Iran: While the crisis worsens each day, regime officials have chosen to blame the Iranian people for their deaths.

On Wednesday, July 22, The People’s Mojahedin Organization of Iran (PMOI / MEK Iran) reported that more than 74,700 people in 347 cities in all 31 provinces in Iran have died from the novel coronavirus. The regime has confirmed 14,853 of these deaths or about one-fifth of the true total.

On Wednesday, the state-run IRIB television network quoted the regime’s Ministry of Health spokesperson’s comments about the spread of the coronavirus. “The number of cities that are designated as being in alarming conditions have witnessed a 40 percent increase. This is a reminder to us to further abide by hygiene protocols and impose further restrictions,” she said. “For example, in Mazandaran province, the number of people hospitalized daily has increased by three-fold and ten cities have been added to this province’s code red cities.”

On Tuesday, the state-run Mehr news agency quoted the Deputy Dean of Tabriz Medical Sciences University in a report about the coronavirus. “The number of deaths in East Azerbaijan province has increased significantly and has been unprecedented and record-breaking during the past 24 hours,” he said.

According to the state-run ISNA, the Deputy Dean of Arak Medical Sciences University in Markazi (Central) Province said on Wednesday, “During the past few days the number of people hospitalized, and Covid-19 deaths have increased tremendously… The city of Arak is in code red conditions and very dangerous. If this trend continues towards the fall and winter seasons, we will not be able to provide adequate medical services to the people.”

“It’s as if they have sworn to kill the people”

While the crisis worsens each day, the regime has yet to allocate additional funding to alleviate the stress on overburdened hospitals. According to a Wednesday broadcast on Radio Farhang, an MP representing Nahavand, Hamedan Province said, “The shortage of medical equipment, including CT scan and MRI devices and ambulance, as well as a shortage of medical staff, especially infection specialists, has caused the people to go to neighboring cities for treatment.”

Over 74,200 people have died of the novel #coronavirus in 347 cities checkered across all of #Iran’s 31 provinces, according to reports tallied by the Iranian opposition PMOI/MEK as of Tuesday afternoon local time, July 21.https://t.co/pnlkFgJQEi

Regime officials have instead chosen to blame the Iranian people for their deaths. An MP representing Gonbad Kavus, Golestan Province told the ICANA news agency on Wednesday, “Officials are blaming everything on the people. They should be reporting on what they have done and are doing? How many ICU [beds] did they provide? How much longer must the people die while waiting for the ICU to clear up? How much oxygen did they provide? The people are dying of lack of oxygen. They must report, how much medicine did they provide? Rare medicine is plentiful in the black market. How many trailers and tents did they provide to the impoverished segments of the society? How many free masks did they distribute? How much sanitizer did they give to the poor and weak? The people don’t even have the power to purchase face masks. They should get a hold of themselves! It’s as if they have sworn to kill all the people! Health insurance [costs] is taking its toll on the people and the renewal of village health insurance costs 8 million rials per person. Think about these poor people!”