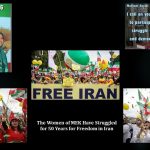 Written by Mohsen Aboutalebi on July 13, 2020. Posted in NEWS

The rise of women leaders in the MEK.

Iranian women have been central to the struggle for freedom in Iran. Many both well-known and less known heroines who sacrificed everything they own have been fighting for freedom.

Khomeini’s era was a fight for equality

After Khomeini took over after the uprooting of the Shah, it has been a long struggle for Iranian women. Khomeini’s rule was a dictatorship and its Islamic fundamentalism humiliated and subjugated Iranian women. As well as making it compulsory for women working in the government sector to wear hijab, it even prevented women from taking up key roles in society.

Back in 1979, when thousands of women joined anti-hijab protests Khomeini’s bullies humiliated and threatened the women until they submitted. The (PMOI / MEK Iran) at that time was totally against any repression of women.

Many Iranians still remember the Ettela’at newspaper front page on June 20th, 1981. Demonstrations had taken place and young girls who had been arrested in the protests were executed. The newspaper took the responsibility of informing parents of these young girls to identify and collect their bodies.

Front cover of Ettela’at newspaper announcing the executions of demonstrators arrested on 20 June 1981.

The rise of women leaders in the MEK

Maryam Rajavi pays tribute to the endurance of the vanguard heroines of Ashraf in the International Women Day ceremony – February 25, 2017.

Despite mullahs’ regime ruthless repression of women, many Iranian women joined the MEK in the last four decades to continue the struggle for freedom. In fact, women have played a leading role in the struggle of the Iranian Resistance for freedom and equality.

Maryam Rajavi at the 40th anniversary of the start of Iranian people’s nationwide resistance, Day of Martyrs and Political Prisoners- June 20, 2020 – Ashraf 3

Even though the mullah’s regime continually repressed women this has not stopped them from joining the (PMOI / MEK Iran). Women have played a leading role in the struggle of the Iranian Resistance for both freedom and equality.

Maryam Rajavi became the co-leader of the (PMOI / MEK Iran) in February 1985. In 1989, she was given the position as the Secretary-General of the (PMOI / MEK Iran), and in 1993, she was elected as president of the National Council of Resistance of Iran (NCRI). These weren’t considered permanent positions but would be reviewed after the mullahs’ regime had been overthrown.

Because of her leadership, women in the Iranian Resistance have taken part in key decision-making positions in Iran’s largest opposition organization. More than half of the NCRI members are women many of whom hold key responsibilities in political, international, social, and cultural areas.

The Iranian women’s struggle for freedom and democracy has never faltered and continues until this day. They and Iran’s youth have installed banners and posters that read: