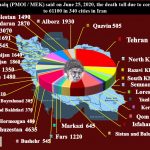 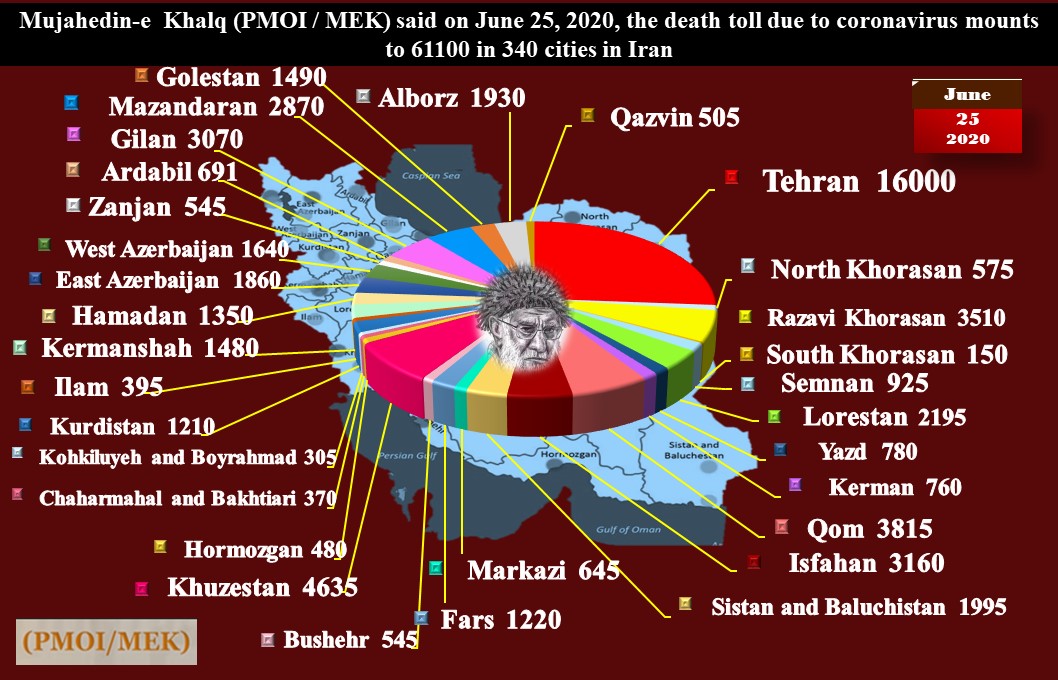 The People’s Mojahedin Organization of Iran (PMOI / MEK) has reported that the Coronavirus Death Toll in 340 Cities Exceeds 61,100.

The People’s Mojahedin Organization of Iran (PMOI / MEK Iran) has reported that more than 61,100 people have died in Iran after contracting COVID-19. The death toll continues to rise at an alarming rate.

Since the beginning of the outbreak, the Iranian regime has been engineering statistics to make the situation look less bad than it is. Its death toll has consistently been much lower than that of the (PMOI / MEK Iran) and officials have tried to indicate that the outbreak is under control.

However, even with the regime’s engineered statistics, it is clear that the number of infections is worryingly high. The head of the Coronavirus Task Force in Tehran recently said that approximately one-fifth of the population of Tehran has already contracted the virus, representing around 2.8 million people.

More than 61,100 people have died of the novel #coronavirus in 340 cities checkered across all of #Iran's 31 provinces, according to the Iranian opposition PMOI/MEK. pic.twitter.com/mpB66Hn3Io

Iran has very significant national resources and the Supreme Leader has an astounding wealth. The country’s president and Supreme Leader have tried to take the herd immunity approach but it has been a complete failure. It is a cruel policy that has resulted in many unnecessary deaths.

When the virus first entered the country, the regime tried its hardest to deny reports. However, the (PMOI / MEK Iran) would not let the issue lie and the regime had no choice but to admit that the outbreak had started.

Even during the crisis, the regime tried to pin the blame on foreign powers. There was talk about conspiracies from abroad and the regime even tried to blame international sanctions.

Medical workers across the country have been working tirelessly and courageously. Unfortunately many thousands of health workers have died after contracting the virus, often because they had not been provided with the necessary personal protective equipment (PPE). At the beginning of the pandemic, the Iranian regime sold PPE to other countries to make a profit.

The people of Iran blame the Iranian regime for the terrible death toll and the extremely worrying situation that has still not been brought under control. The President-elect of the National Council of Resistance of Iran (NCRI) Mrs. Maryam Rajavi has also blamed the Iranian regime for the situation. She said that the death toll is a direct consequence of Supreme Leader Ali Khamenei and President Hassan Rouhani’s policies that go against advice and recommendations of the relevant experts and ministries.

The regime should have put the people on lockdown, but instead, it allowed people to continue to work and carry out normal activities. The regime’s concerns are centered around the economy and not the people or the already struggling health services.

Mrs. Maryam Rajavi points out that the regime has followed less than 9 percent of health protocols. Social distancing should be applied to places with high infection rates, especially in the densely populated Tehran.

The people of Iran have been left extremely vulnerable. The regime’s negligence is criminal and, for the sake of the people of Iran, the international community has a responsibility to speak out and take action. Or at least to back the popular calls for regime change.