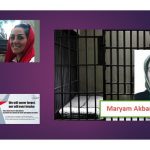 MEK Iran: The Mullah’s regime judiciary is now subjecting some of these long term detainees to even more pressure.

Despite long sentences being imposed on women who oppose the current regime, the judiciary is now subjecting some of these long term detainees to even more pressure.

The case of Maryam Akbari Monfared

Maryam Akbari-Monfared lost three brothers and a sister in the 1980s under regime rule. Her siblings, Roghieh and Abdolreza, were executed during the 1988 Massacre, and while the regime verbally informed Akbari-Monfared’s parents of their executions, it has never revealed where they are buried.

Maryam Akbari-Monfared asked the U.N. In February 2017, for help in finding her siblings. Because their burial locations were never disclosed, the U.N. Working Group on Involuntary and Enforced Disappearances (WGEID) has recognized the two victims as enforced disappeared persons.

Maryam Akbari Monfared was recently summoned to the Evin Courthouse, but she refused to turn up. Her reason given was that she hadn’t been informed in writing and she hadn’t been offered any access to a lawyer. Despite being in prison she was told to present herself at the court because she chanted anti-regime slogans during the night of February 11th, which was the anniversary of the 1979 Iranian revolution.

Maryam Akbari Monfared was taken into custody in late December 2009, after she had been in contact with her siblings, who were People’s Mojahedin Organization of Iran (PMOI / MEK Iran) members. The charge laid against her was “Moharebeh” or “waging war against God via the (PMOI / MEK Iran).” She was sentenced to a prison term of 15 years in a trial lasting only 5 minutes and with no legal representation. Now, she has been almost 11 years behind bars in the notorious Evin prison and hasn’t been allowed out for even one day.

In February 2017, political prisoner Maryam Akbari-Monfared asked the @UN to help her find the truth about the fate of her siblings, Roghieh & Abdolreza, who were victims of enforced disappearances and executed in #1988Massacre.#EnforcedDisappearance #WGEID @jy_ledrian @eu_eeas pic.twitter.com/sk9wu8KAm6

Maryam Akbari Monfared isn’t the only woman being picked on, as last Saturday a similar request was made to Atena Daemi and that was to appear in the Evin Courthouse on June 7th. Her charge also was disrupting order in the prison where she was heard chanting anti-regime slogans on February 11th. This is not the only time this political prisoner and civil rights activist who specializes in the rights of children has been called to court. On May 13th of this year, a charge leveled at her by the Revolutionary Court of Tehran was heard as well.

The case of Atena Daemi

She was first arrested in 2014 on October 21st, 2014. She was sentenced to a 14-year prison term on March 14th, 2015. The charges for her peaceful civil activities were defined as the following:

On February 15th, 2016, Atena Daemi was released after serving 16 months in prison with her initial sentence being lowered to 7 years. But on November 26th2016 following a violent arrest, she was taken to Evin Prison to serve out her sentence.