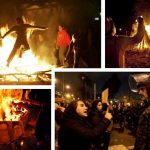 MEK Iran: Iranian Regime Tries to Put an End to New Year Celebrations before They Start

Written by Mohsen Aboutalebi on March 17, 2020. Posted in NEWS 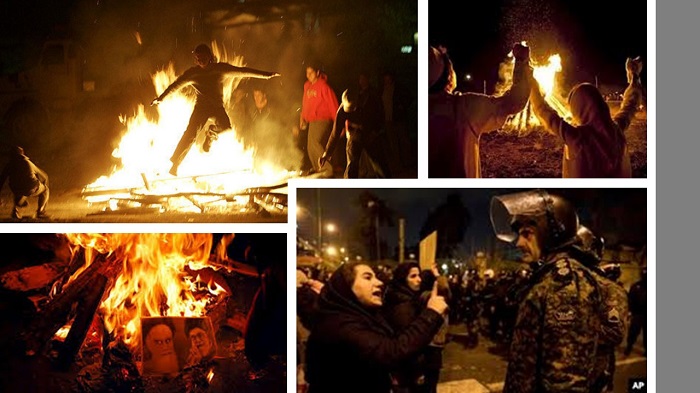 Fire festival: a crimson and blazing Feast of Fire for the people of Iran who are grieving in pain, and who are furious and rebellious.

This time next week it will be the eve of Nowruz, Iranian New Year. Iranians take the occasion to celebrate Chaharshanbe Suri by lighting bonfires and jumping over the flames. This annual fire festival is the tradition that marks people of Iran getting rid of the old to give place for the new.

Obviously this involves countless gatherings of families, friends, and communities and the Iranian regime has, in the past, tried its hardest to prevent the people from coming together.

However, this year the situation is somewhat more unusual and uncertain. Not only is the political situation even shakier than before following massive protests and anti-government demonstrations since last November, but the country is also in the middle of a major health crisis.

The regime is more aware than ever that levels of discontent across the country are high and that it will take one event to spark another major uprising, like the one of last November that shook the regime’s foundations.

Since Coronavirus arrived in Iran, the government has lied to the people, concealed information and downplayed statistics. The people have been left to fend for themselves and the people are livid. The situation has been made so serious because of the regime’s lack of responsibility and the sheer negligence with which it has approached the outbreak.

It has been a case of too little, too late, for #Iran regime to halt escalation of the novel #coronavirus, #COVID19 as over 5,500 people have lost their lives as the virus spreads out of control to more and more cities throughout the countryhttps://t.co/PhmTqWqWmG@USAdarFarsi pic.twitter.com/0h9uu4or7a

Therefore, the regime is planning to mobilize its numerous forces. Stopping the virus from spreading even further across the country does not seem to concern the regime at this moment in time.

A state-run news outlet reported in recent days that the regime has been advised to “quarantine” the fire festival. A deputy commander of repressive forces in the province of East Azerbaijan has said that firecrackers and any other flammable materials will be banned. He said that the fire festival this year must be different to previous years and that gatherings of people must be prevented. He added that the police would be enforcing this.

The regime is using the context of Coronavirus to prevent people from celebrating the new year. It is focusing most of its energy and resources on suppressive measures and it trying to delay its demise.

Tonight marks a crimson and blazing Feast of Fire for the people of #Iran who are grieving in pain, and who are furious and rebellious. Iran’s brave youth and heroic Resistance Units will set fire to the regime’s figures as they did in the fiery uprising of November 2019 pic.twitter.com/0rtE2dB0FF

The main opposition to the Iranian regime – the People’s Mojahedin Organization of Iran (PMOI / MEK Iran) has been monitoring the situation from both inside and outside the country. Its social headquarters announced that the regime is trying to see the people “silenced and depressed”. It has vowed to “celebrate the annual Fire Festival at any possible place”.

In a statement, the MEK Iran  said:

“We will welcome the new year with protests during the annual Fire Festival and we will take back Iran from evil mullahs.”

The people of Iran have faced obstacle after obstacle in their quest for freedom, human rights, and democracy. They have refused to be silenced thus far and their determination grows stronger with each suppressive measure that the regime implements.

At this critical time, it is imperative for the people of Iran to be supported – both in their fight against Coronavirus and in their quest for freedom from the regime.