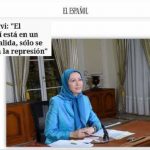 Maryam Rajavi to Spanish Magazine: Regime is on Brink of Overthrow 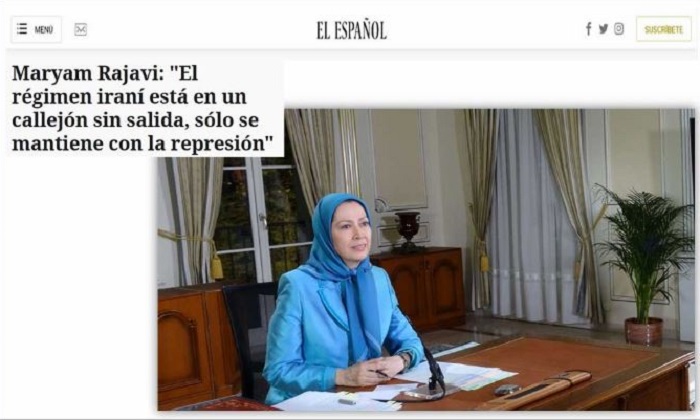 Maryam Rajavi the President-elect of NCRI

Earlier this month the Spanish magazine El Espanol interviewed Mrs. Maryam Rajavi, President-elect of the National Council of Resistance of Iran (NCRI), about her thoughts on the current state of affairs in Iran and the future of the MEK Iran and Iranian Resistance. The interview was published in the magazine’s February 8, 2020 edition and includes Mrs. Rajavi’s recommendations on EU policy toward the Iranian regime.

Mrs. Rajavi was asked a series of questions for the magazine interview. The questions and answers are summarized below:

In your opinion, what is the Iranian regime’s current status?

“The mullahs’ regime is on the brink of being overthrown, and it is unable to get out of this situation,” Mrs. Rajavi replied. “The main factor for this circumstance is social disenchantment and a deep and widespread discontent. The regime has no solution for addressing this, and additionally, this discontent is volatile and explosive.

She cited the five anti-regime uprisings that have taken place since 2018 and the thousands of protests by Iranians from all walks of life as support for her statement, adding that regime authorities acknowledge that 96 percent of the Iranian people are opposed to the regime.

Mrs. Rajavi pointed to the failing economy, environmental disasters, and the lack of revenue from oil exports due to economic sanctions as further drivers for public discontent.

According to Mrs. Rajavi, these problems have left the regime at a dead end. “Whatever path it takes, it undermines its own existence. For example, the regime has an urgent need to increase its revenues. Last November, it raised fuel prices to replenish its coffers. But this decision triggered a huge uprising, which left behind irreversible political and economic damages. The regime banks solely on suppression to survive,” she explained.

Has the policy of appeasement with the Iranian regime following the agreement signed with Obama and other European leaders produced positive results? Do you think there has been an improvement in human rights in Iran after the signing of the agreement?

Mrs. Rajavi stated emphatically that the policy of appeasement has always “always acted as an obstacle to democratic change in Iran.”

She stressed that efforts to seek moderate factions within the regime by giving concessions to the mullahs have backfired and undermined the opposition.

She also emphasized that the 2015 Iran nuclear deal did not promote security in the region but instead caused the West to ignore the regime’s meddling in Syria and Yemen.

The #Iran regime’s meddling in the other countries’ affair is an important pillar for its existencehttps://t.co/AfuaMnwSSb#IRGCTerrorists #terrorism #terrorist @USAdarFarsi pic.twitter.com/A78yq3srrw

She also emphasized that the NCRI and the MEK Iran are strongly committed to a non-nuclear Iran.

What did the assassination of General Qassem Soleimani mean for opponents of the regime? What role did he play in Iraqi politics in recent years?

“In the current power structure of the regime, he was practically the No. 2 official. He was the head of terrorism and warmongering in the region. He was directly responsible for the expansion of the war in Syria, as well as the war in Yemen and also the hidden occupation of Iraq that was initiated in 2003,” said Mrs. Rajavi.

“He was also behind the largest attacks against members of the Iranian Resistance in Iraq, in particular the Ashraf massacre of September 2013,” she added.

Mrs. Rajavi argued that Soleimani has no substitute and that his death dealt an irreversible blow to the regime’s strategies of exportation of terrorism and war, which are central to its survival.

How have the latest demonstrations against the Iranian regime evolved since their start in December 2017? What role do women play in the protests? And what about the main opposition movement that you lead?

Mrs. Rajavi answered that the Iranian protest movement took a “great leap forward” after the December 2017/January 2018 uprisings, starting with concrete demands but progressing to calls for regime change.

“From a political standpoint, these uprisings accentuated three lines of fundamental demarcation that cannot be reversed. The first is the Iranian people’s unwavering determination to overthrow Ali Khamenei and his regime. The second is the rejection of all factions of the theocracy, including Hassan Rohani, who plays the ‘moderate’ card while being involved in all political and social suppressive measures,” she said.

“The third irreversible development was the rejection of the remains of the monarchist dictatorship,” Mrs. Rajavi added.

What price have Iranians who opposed the regime paid in the past nearly 40 years?

Mrs. Rajavi detailed some of the sacrifices made by MEK Iran members over the past forty years. She described the mass of MEK Iran sympathizers in the summer of 1981, calling it “the beginning of the reign of terror, mass executions and medieval tortures.”

She also described the 1988 Massacre, in which 30,000 MEK Iran political prisoners were executed over the course of a single summer based on a fatwa from regime founder Ruhollah Khomeini. The victims were executed solely for their political beliefs and buried in unmarked mass graves.

30000 political prisoners, mainly MEK members, and supporters slaughtered by the Iranian regime in 1988

Mrs. Rajavi said that Western governments have yet to acknowledge the massacre.

“We continue to insist, however, that the UN Security Council should refer the dossier of this massacre to the International Court of Justice in order to bring the perpetrators, including Khamenei, the current regime supreme leader, to justice,” she said, adding that the current regime Judiciary Chief and Justice Minister were both members of Death Commissions in 1988 and played key roles in carrying out the massacre.

As a leader of the main opposition movement, what is your alternative to the theocratic regime of Khamenei and Rouhani? What sets your movement apart from other opposition movements in Libya, Iraq or Syria that have resulted in wars or bankrupt states?

Mrs. Rajavi answered that the NCRI “offers a perspective for the future that is based on freedom, democracy, and equality.”

She elaborated on the NCRI’s platform, saying: “We seek a republic based on the separation of religion and state, political pluralism, gender equality, human rights, the abolition of the death penalty, autonomy for oppressed ethnic groups in the context of Iran’s territorial integrity, equal economic opportunities, environmental protection, a non-nuclear Iran, and solidarity and peaceful coexistence with neighboring countries.”

As for what sets the NCRI and MEK Iran apart, Mrs. Rajavi said, “Our movement has deep roots in Iranian society. For 55 years, this movement has waged a relentless struggle against two dictatorships. During all these years, it has relied on the Iranian people and a broad social base. Women play a key role in our resistance movement, which itself guarantees the Iran of tomorrow.”

Women in the leadership of the Iranian resistance

She also discussed the role of the MEK Iran network in forging Iran’s democratic future: “The NCRI and its members have not just come up with plans for the future. They have forged political traditions of democracy and tolerance in practice and during the difficult decisions made throughout this struggle. They have proven that they are the alternative to the regime. The main component of this coalition, the MEK Iran, has a well-organized network inside Iran and has shaken the regime’s foundations repeatedly by inspiring and organizing battles, uprisings, and political movements. It is the presence of such a democratic alternative that guarantees that Iran will not fall victim to the same fate as the countries you mentioned,” Mrs. Rajavi said.

The Iranian regime tried to plot against those who attended the annual meeting of the Iranian opposition in Villepinte in June 2018, but it was not the first time that they tried to attack you and your movement on European soil. Can you explain this further?

“Whenever there is an uprising in Iran, the mullahs’ only perceived solution is to attack the resistance movement. They rightly understand that it is the only movement capable of orienting uprisings towards the regime’s overthrow. It is the presence of this resistance movement that causes the uprisings to morph into a threat of overthrow for the regime,” Mrs. Rajavi replied, citing the January 2018 uprising as the incident that preceded the attacks.

She then enumerated the series of foiled attacks by regime agents in 2018, including the attempted bombing of a Nowruz celebration in Albania; the foiled terrorist attack on the Free Iran rally in Villepinte, France; and the arrest of two regime intelligence agents in the United States.

After decades of silence, do you think that public opinion is finally aware of the situation of human rights violations in Iran? Do you think there is now more support for Iranian dissent among the public? And on the part of Western governments? What should be the measures taken by international organizations concerning the Iranian regime?

“The scale of the crimes, massacres, oppression of women and suppression of freedoms in Iran and their continuation over many years is such that it cannot be hidden from the eyes of the world,” said Mrs. Rajavi.

She noted that the MEK Iran has published the names of people executed by the regime, documented the torture occurring in Iranian prisons, revealed locations of mass graves of victims of the 1988 Massacre, and released videos of women being stoned by the Revolutionary Guards (IRGC).

“The problem,” said Mrs. Rajavi, “is that despite all this, governments, and most importantly the U.N. Security Council, have ignored the dire human rights situation in Iran in the name of their economic and diplomatic interests.”

Mrs. Rajavi called on the EU and United States to “make their relations with the mullahs’ regime contingent on putting an end to the arrest of protesters and the release of thousands of those detained during and after the uprising in November 2019.”

Do you think it would be possible to bring calm to the region if the Iranian regime changes?

Mrs. Rajavi replied that the mullahs rely on the export of terrorism and Islamic fundamentalism to remain in power, devoting a large portion of the country’s wealth to fund their military operations.

“Even as the country suffers from bankruptcy and a deep economic recession, the regime continues to spend astronomical sums of money to pursue this policy. The regime’s criminal meddling in the affairs of the countries of the region is widely hated within Iranian society,” she explained.

Mrs. Rajavi went on to stress that the regime would continue its “belligerence, terrorism, and violations of the sovereignty of the countries of the region until the day it is overthrown,” thus necessitating a firm policy toward the regime and the expulsion of the regime from countries in the Middle East.