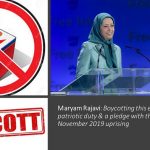 High voter participation in Iranian elections is a given under the repressive regime, which gives the government the appearance of legitimacy that it desperately needs after the recent uprisings. However, the resentment that led to the protests has not diminished, and Supreme Leader Ali Khamenei has managed to worsen the situation by directing his Guardian Council to remove 90 Majlis (Parliament) members from President Hassan Rouhani’s faction from consideration for re-election. Angry Iranians are calling the upcoming election a “selection” and vowing to boycott the process as a sham. This could deal a potentially fatal blow to the regime, which is already faltering due to international isolation, economic crisis, social unrest, and political infighting.

A state-affiliated agency hoped to boost voter participation with a poll it thought was guaranteed to produce positive results. The poll, posted on its Telegram channel, asked Iranians if they planned to vote. Despite widespread participation from members of the Revolutionary Guards (IRGC) and Basij Force, 82 percent of respondents said that they planned to boycott the election. The poll was immediately removed from Telegram.

On Thursday, regime Judiciary Chief Ebrahim Raisi traveled to Bushehr, in southern Iran, and said that those who abstained from voting were aligning themselves with “the enemy” (a term often used to describe the Mujahedin-e Khalq (PMOI/MEK Iran). “Election is an important issue. Whoever whose heart is in this system… must perform well in carrying out their duty in this regard. Whoever, with whatever motive, undermines this election, knowingly or unknowingly, wittingly or unwittingly, would be in the enemy’s camp by weakening the election,” said the man who personally ordered the extra-judicial executions of thousands of MEK Iran political prisoners during the 1988 Massacre.

Tehran’s Friday prayer leader Mohammad Emami Kashani echoed Raisi’s talking point about the enemy, saying, “Going to the ballot box is caring for the security and safeguarding of the country. The enemy will be looking at the turnout.” Friday prayer leaders are considered mouthpieces of the Supreme Leader.

Mashhad’s Friday prayer leader Ahmad Alam al-Hoda also repeated the regime’s talking points, saying, “The enemy wants to undermine the people’s participation in the election.” He also took a shot at Rouhani, saying, “That they say there is no competition in the election, but merely a selection, is regrettable for us. Some holding high office inside the country echoes the views of the enemy, and parrot what the enemy says about the election is a formality.”

Last week Rouhani compared the election to the selections under the Shah’s dictatorship but encouraged people to vote anyway to “preserve the system.”

Rouhani: No Parliamentary Election Was Like the First One; Even #MEK Participated https://t.co/0xeRDGOMrj@USAdarFarsi #Iran #FreeIran

Perhaps the most extreme example message came from a cleric in Tehran who spoke before Kashani at Friday prayers and said that not voting was forbidden by Sharia law. “Not participating in the election weakens the regime. It is religiously forbidden,” he said. “For eligible voters, participation is a Sharia-dictated and divine duty. It is a must, which everyone should perform like prayers.”

He also made it clear that women could vote without their husbands’ permission.

Maryam Rajavi, President-elect of the National Council of Resistance of Iran (NCRI), tweeted that the election boycott is a patriot duty, further noting that the Iranian people cast their true vote during the November 2019 and January 2020 uprisings.

Boycotting this election is a patriotic duty & a pledge with the martyrs of the November 2019 uprising #Iran #BoycottIranShamElections pic.twitter.com/oAzKBwDbPp