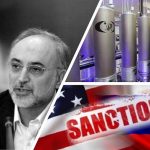 Brian Hook, the U.S. special envoy for Iran, described the need for new sanctions in his briefing.

“The Atomic Energy Organization of Iran has played a big role in Iran breaching its key nuclear commitments.  It has exceeded the limits on its uranium stockpile and enrichment levels.  The head of AEOI personally inaugurated the installation of new, advanced centrifuges to expand its uranium enrichment capacity.  He also chaired a ceremony when Iran started injecting uranium gas into advanced IR-6 centrifuge machines,” said Ambassador Hook.

Plundering of the Nation’s Wealth

A large portion of the Iranian population is also unable to afford food or shelter. After recent flooding in Sistan-Baluchestan Province, many of those who did have homes saw them destroyed or damaged. The regime has failed to provide flood relief to these victims or the victims of last year’s deadly floods. It failed to maintain dams and drainage systems that would have prevented much of the damage from both floods as well, choosing instead to fund terrorist proxies in foreign countries.

The United States withdrew from the Joint Comprehensive Plan of Action (JCPOA), also known as the Iran nuclear deal, last year, saying that the deal was ineffective in curbing the regime’s malign behavior. It reimposed pre-2015 oil sanctions and restricted other countries from dealing with Iran using U.S. financial institutions, essentially grinding the regime’s oil exports to a halt. The regime responded by gradually stepping back from its commitments under the 2015 deal in an attempt to force the United States to lift the sanctions. This strategy has so far not been effective.

The Mujahedin-e Khalq (PMOI/MEK Iran) has repeatedly stressed that the Iranian regime cannot be trusted to honor the terms of a nuclear agreement. The MEK uncovered the regime’s secret nuclear program once before and revealed it to the world, leading to the pre-2015 sanctions. The mullahs will continue their efforts to build a nuclear weapon as long as they are in power.

The only way to end the regime’s nuclear threat is to end the regime itself, which the MEK stands ready to do. In the meantime, the international community can help contain the mullahs by adopting a firm policy in dealing with the Iranian regime. International leaders can also help by recognizing the right of the Iranian people to overthrow their oppressors.