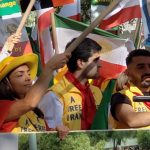 In U.S., the MEK Supporters Echo the Voice of Their Compatriots in Iran Protests

Written by Esmail Mohades on November 24, 2019. Posted in NEWS

The Iranian diaspora in the US, supporters of MEK, held a rally to support Iran protests – November 2019

Anti-government protests erupted in Iran on Friday, November 15, over the regime’s sudden increase in the fuel price. The protests are going on, yet the Iranian regime tries to silence them in vain. For this reason, the Iranian Americans, supporters of the People’s Mojahedin Organization of Iran (PMOI) also known as the Mujahedin-e Khalq or MEK held demonstrations in 10 states in solidarity with the Iranian people’s uprising.

The MEK supporters held a march in Washington DC in support of the Iranian protests for a free Iran in front of the White House.

They held banners that read: “Recognize the right of the Iranian people in #IranProtests to free their country,” “Support Iran protests against the ruling dictatorship in Iran” and “Hail to the Iranian people who have risen in cities across the nation to Free Iran.”

The protestors also honored the memory of the martyrs of the recent uprising in Iran.

The demonstrators also paid tribute to the uprising’s martyrs by setting up a table with candles, along with a bouquet of roses.

In another rally in Southern California, the Iranian American community gathered in front of the Federal Building and condemned the brutal regime in Iran and supported the Iranian people in their struggle for a free Iran. They urged the international community to recognize the right of the Iranian people to establish a free country.

Iranian American supporters of the MEK in Houston, Texas, held a separate rally in solidarity with the protesters in Iran.

Since the protests erupted on Friday More than 300 protesters have been killed four Thousand have been wounded.

If defying the rule of religious dictatorship &rising up to establish freedom, democracy and equality are considered mischief &insecurity for the mullahs’ regime, then #Iran’s rebellious youths, resistance units, &all the Mojahedin &freedom fighters are proud of having done so. pic.twitter.com/Nc8abR8tPn

Mrs. Maryam Rajavi, the President-elect of the National Council of Resistance of Iran (NCRI), called on the United Nations Secretary-General António Guterres to brief the Security Council about the atrocities perpetrated by the religious dictatorship ruling Iran, its Supreme Leader Ali Khamenei, and the IRGC, in view of the rising number of those killed and wounded. She urged him to convene an extraordinary session of the Council.