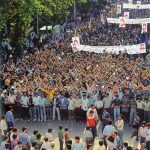 Written by Admin on August 13, 2019. Posted in Defenders of Freedom, NEWS, PMOI/MEK Support in Iran

The “Mothers” demonstration, on May 2, 1981, when over 200,000 supporters of the MEK, took it to the streets of Tehran to protest the killing of 2 teenage girls (MEK supporters), who were shot dead for distributing information behind a stand in one of the streets in Mazandaran. Young MEK supporters have formed a chain in front and side rows to provide protections for the mothers (in the middle).

In state-run media and in official statements, senior Iranian officials have recently made unprecedented remarks about the People’s Mojahedin Organization of Iran (PMOI/MEK), its impact on society, and its role in international policymaking.

A Change in Regime’s Strategy on MEK

For years, it has been the state policy to keep silent about the MEK and its impact, both domestic and global. The recent salvo of remarks and statements reflect a change in the regime’s strategy in this regards. The new approach stems from an unprecedented MEK presence in domestic affairs. Popular support and the public awareness of MEK’s activities have left the regime incapable of continuing its practice of denial.

Official remarks have defended brutal suppression against the MEK and have also expressed anxiety about the MEK’s progress and its role in organizing and galvanizing protests against the regime. Senior officials warn about “major events” that could still be forthcoming.

The officials are fully cognizant of the fact that after years of a massive demonizing campaign against the principal Iranian opposition and systematic repetition of the claim that the MEK has no serious presence or role in Iran, acknowledging the real presence of the MEK in Iran is politically costly. However, it is evident to them that in light of the political state of affairs in Iran, they are bound to pay a price for inspiring their forces and to boosting loyalist morale.

A creator of three state TV serials targeting the MEK said in an interview on July 28: “The current strategy vis-a-vis the MEK is not one of silence. A lot of people are interested in making movies and serials about this organization and its members. And a number of other people have also made serials about them… Prior to Armaghan Tariki (i.e. one of the TV serials), no TV serial was made in this regard. But after that, the managers of state TV showed a lot of interest. In reality, this organization has exposed our nuclear issues on 18 occasions in recent years and a lot of the sanctions are consequent of their activities. All of these resulted in the fact that the authorities and managers concluded that it is necessary to make movies and serials about the Monafeghin.” [Monafegin, meaning hypocrites, is the pejorative term that the regime uses to describe the MEK.]

The following are some of the authorities’ recent remarks on the MEK: 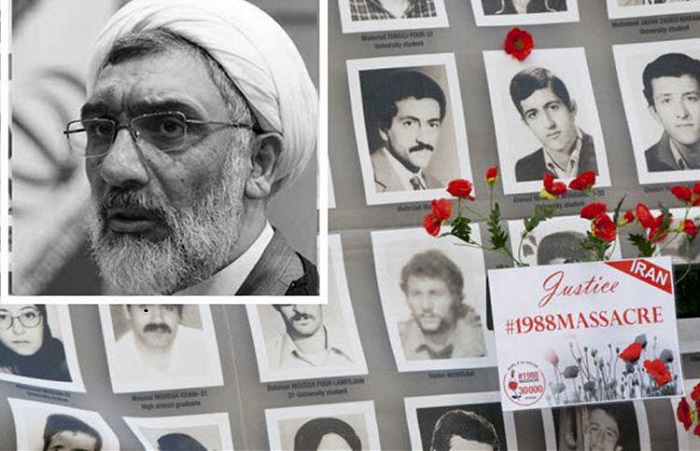 Photos of the MEK activists who were massacred during the 1988 massacre. Pourmohammadi was one of the members of the death committee responsible for the massacre.

“MEK has destroyed our image all over the world. During the past 40 years, there hasn’t been any calamity against the Iranian regime that the MEK hasn’t played a key role in. We haven’t evened out our accounts with the MEK yet. We will make our points and statements [about 1988 executions] subsequent to making our accounts even. It is a serious matter…. Many of our missions in the Iran-Iraq War failed due to the MEK. They found out about our operations, exposed them and as a result, we failed…. Now, should I answer for why I fired a mortar by mistake or did something wrong? All the MEK members are criminals and must be put on trial. According to all international laws they must be punished and face the maximum penalty. We have not even our accounts. It is not the time for these words. Now it is time to exterminate them.  The MEK is the worst enemy of this nation [Read the religious extremism ruling Iran]. Today, they must be held to account and be brought to justice. We must uproot every one of them. Unfortunately, due to the current atmosphere of the society and foolishness of some, it is us who have become accused. Rather, the criminals must answer. What are these remarks that some are making in our country?   Some repeatedly talk about history. This is the context of history.” Referring to the exposure of the 1988 massacre of MEK political prisoners that the regime had tried to hide for decades and now is coming to light as a result of the organization’s popular support.

Interviewer: Was this also the issue of criticism by Mr. Montazeri?

(Hosseinali Montazeri was the heir to Khomeini in 1980s. He was dismissed by Khomeini in early 1989 and sentenced to house arrest due to his protest against the massacre of 30,000 political prisoners in the summer of 1988. An audio file was revealed three years ago about a meeting between Montazeri and key figures implicated in the massacre in Tehran, including Pourmihammadi. In this tape, Montazeri stated explicitly that this massacre will be recorded in history as the worst crime of the Islamic Republic.)

Pourmohammadi: “It was unfortunate, but the tape was released anyway. Many of the individuals who purport transparency, in reality, they are doing it on behalf of the enemy of course! Otherwise, what was the reason for revealing that audio file?  The context of the discussion was already written and was available. What was the reason for the audio file to be revealed after all these many years? …I believe the MEK case is clear. We have no doubt, no question, and no ambiguity in the case of MEK. Now is a time of war with the MEK.  It is not the time to talk. This is an important point for us. It is the time to uproot hem. It is time to paralyze, exterminate and try them…It is time to do this sort of work. It is not the time to answer these criticisms or to provide legal responses or things of this nature[the 1988 massacre of MEK supporters].”

“The current situation should not make us negligent so as to ignore the protests, not see the disenchantment or prevent it, not provide a proper response and assume that these do not exist. Any incident can lead to a major development. We have to be vigilant.”

“The MEK is still potential and current threat for the Islamic Republic. Their movement is alive. The MEK has been the basis for all of the sanctions against us. If the MEK was not around, the West still would have imposed sanctions on us; however, the MEK provides them with first-rate and accurate information”, referring to MEK’s numerous revelations of regime’s nuclear weaponry and Ballistic Missiles program, and their terrorist activities in the region, as well as the violations of human rights at home

While underscoring that the MEK is still the most active and the most powerful opposition group against the regime, Shaeri stressed that the reason for the continuation of MEK activity is its deep, calculated and judicious actions.

He pointed out that the measures exposing the MEK have not been appropriate for two reasons:  “First, we portray them as a cowardly enemy and as a result we discount them. We must consider the enemy serious because they are still motivated and work against the Islamic Republic with proper organization and structure. Second is the danger of MEK infiltration inside the regime, which is the main obstacle in confronting them.”

“We must be vigilant and should realize that the enmity of the MEK is so profound that it will never give up on us…Everything that takes place in the world against us, we must know that it is the result of their lobbying effort somewhere, or a price that they have paid, or is the result of intelligence that the MEK has provided. On the issue of missiles, we witness that it was based on the information that they provided to Americans. Regarding human rights, they makeup dossiers and files and provide them to Europeans and they put pressure on us in this way. They use all the leverages against us. We should be aware of this and should be vigilant.”

Esmail Kousary, Deputy Commander of IRGC Sarollah Garrison (the main IRGC unit responsible for the suppression of the 2009 uprisings in Tehran) and Mehdi Hasheminejad, a senior official of Ministry of Intelligence and Security (MOIS)

Head of Habilian Association, Hasheminejad, head of the MOIS division responsible for emanating negative propaganda and lies against MEK:  “The presence of 1500 people round the clock in three shifts indicates that they had planned the protests and this was done in service of the global arrogance. As our officials pointed out, planning of the enemy played a key role in the unrest that took place in our country in 2018.  So, our attitude must recognize the enemy and its targets, so that we will be able to counter them.”