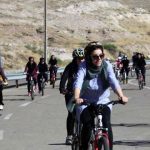 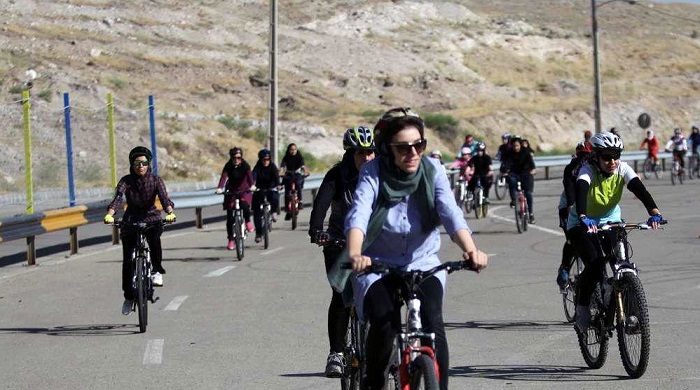 Archive photo- The Iranian regime’s repressive forces have once again cracked down on Women, abandoning the use of bicycle for them.

In remarks carried by the state-run IRNA news agency, Prosecutor Ali Esfahani said, “As per the attestation of Muslim scholars, and based on the law, cycling by women in public is haram [prohibited]. The police have been ordered to initially give women bikers notices and take their IDs. Otherwise their bikes will be confiscated.”

Esfahani went on to discuss consequences for violators of the ban. “First-time offenders will have to go to the security police and sign a pledge,” he said. “They will not be punished and their personal documents and bicycles will be returned. If they repeat this sinful act two or three times, they will be punished in accordance with the Islamic Penal Code.”

Esfahani justified the crackdown on women cyclists by claiming that they had been “harassed” and citing complaints by clerics. “It has been some time that the heads of Friday prayers and the families of martyrs have complained of women’s cycling in public areas,” he said.

Although Iranian law does not explicitly prohibit women from using bicycles, the clerical regime has always frowned upon public cycling by women, calling it “immoral.” In September 2016, regime Supreme Leader Ali Khamenei issued a fatwa banning the public use of bicycles by women, describing women’s cycling as “ostentation.” He also prohibited women from using bicycles in the presence of strangers or those outside of their immediate families.

“Riding bicycle often attracts the attention of men and exposes the society to corruption, and thus contravenes women’s chastity, and it must be abandoned,” Khamenei said, in response to an inquiry about the fatwa at the time. The fatwa clearly shows his backward ideology presented under the name of Islam and the misogyny within highest officials of the regime.

The city of Isfahan has not strictly enforced the fatwa until now, but city officials have faced growing pressure from clerics to address the perceived endorsement of women’s cycling and to enforce other oppressive regime policies.

#Iran's Regime Bans Women From Riding Bicycles in #Isfahan
The Iranian regime's official news agency IRNA quoted Prosecutor Ali Esfahani as saying: "As per the attestation of Muslim scholars, and based on the law, cycling by women in public isprohibited."https://t.co/Wdpiw1peKB pic.twitter.com/Hdhqmc6W8l

Seyed Yusuf Tabatabaie Nejad, Khamenei’s representative in Isfahan Province, recently commented that “officials should not allow the religious and cultural identity of the city of Isfahan to be tarnished by breaking norms.”

He then thanked Prosecutor Esfahani for his “good orders” and good measures” in cracking down on enforcement of “women’s biking, the hijab, dog walking and parties held in orchards.”

On April 12th, the temporary Friday prayer Imam in Isfahan, Abolhassan Mahdavi, used his sermon to criticize city leaders in Isfahan for allowing women to ride bicycles in public. He demanded that officials deal with the issue immediately.

The MEK is strongly opposed to laws that prevent women from fully participating in public life. The Iranian Resistance and its leader, Mrs. Maryam Rajavi, believe that Iran should be governed by a secular democracy where women and men enjoy equal rights and representation in all spheres of life.

The Iranian regime has maintained its rule for forty years through suppression and intimidation, but the people have shown through their protests that they are no longer willing to accept this treatment. The MEK provides a path to a free Iran.