Khuzestan has been under flooding, since last week, while reports indicate that no aid has been provided by the regime and they have been sending security forces to suppress any voice of protest.

Six weeks after catastrophic floods swept through 25 out of 31 of Iran’s provinces, disaster victims across the country are still waiting for much-needed assistance from the regime.

On Tuesday, the administrator for the district government office in Hamidiyeh, Khuzestan Province announced that three villages near the city of Hamidiyeh are still covered by floodwaters and another three villages are in danger of flooding.

“Some residents of the flood-hit areas are still living in tents, more than a month since the start of the floods in this area,” he added.

The economic fallout from the floods has wreaked havoc on the Iranian economy, which was already in crisis. Businesses, mines, factories, and industries are struggling to recover from the massive damage caused by the disaster.

Regime experts estimate that almost ten thousand factories were damaged in the floods, leading to the loss of 30,000 jobs.

Regime Interior Minister Abdolreza Rahmani Fazli recently estimated the cost of these damages at between 30 and 35 billion Toman.

#IranFloods have reached 29 out of 31 provinces. Almost the whole country has been affected. Hundreds of thousands of homes, buildings and infrastructure destroyed by man-made floods. #Iran #HumanRights pic.twitter.com/QqNeYMTXmr

Farmers have suffered grave financial losses due to the floods, and many are unlikely to see any relief.

According to the ILNA news agency, “The floods have caused more damage to the farmers of Golestan, Lorestan, and Khuzestan, than anywhere else in the country.”

However, the regime’s Ministry of Cooperatives, Labour, and Social Welfare stated that insurance benefits will only be paid to those who previously paid for unemployment rights. Those on short-term contracts were promised limited assistance, but MEK sources inside Iran report that these people have yet to be contacted.

Approximately 1,300 pumping stations in Lorestan Province, along with gardens and lands, have been damaged, according to Mohammad Biranvand, the representative of Khorram Abad. 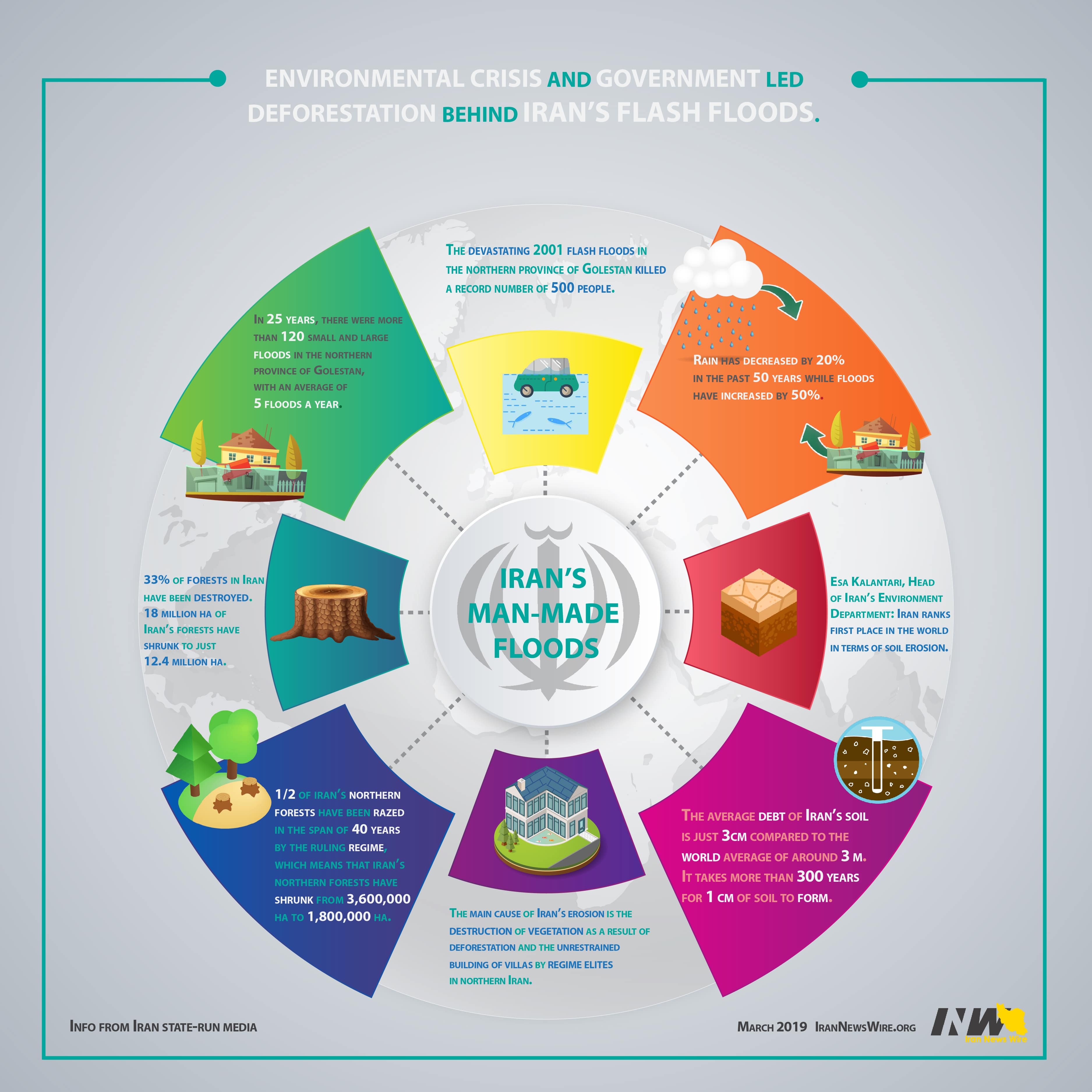 Residents in these areas are unlikely to receive assistance, though, because of the regime’s restrictions on who can claim government benefits. Social support expert Farshid Yazdani told the ILNA news agency that “many of the villages are uninsured, so their residents will struggle with claiming their unemployment rights now.”

Unemployment was a serious issue before the floods, and now the crisis has reached a breaking point. The regime has yet to propose a workable plan to repair the damage done by the floods or to address the needs of its citizens in the aftermath of the disaster. Meanwhile, it has become evident that government incompetence and corruption was responsible for a large portion of the destruction caused by the floods, and no solutions have been proposed to prevent a future catastrophe.

An environmental expert from Tehran studied the failure of bridges during the floods and concluded that the regime was responsible for designing and engineering faulty infrastructure that failed during the floods.

“Over 400 bridges have been destroyed during the recent floods in Iran,” he said. “These bridges are less than 50 years old, whereas the Sasani Bridge built around two thousand years ago, still stands. This proves our incompetent government management and poor engineering designs of our infrastructures.”