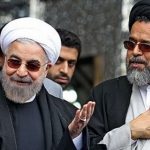 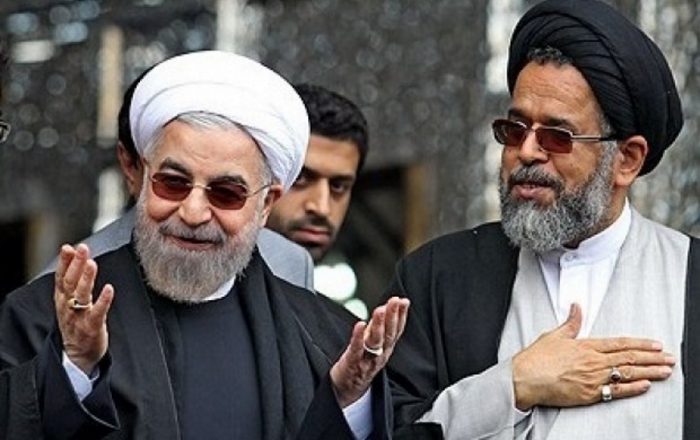 Mahmoud Alavi, the Iranian regime’s Minister of Intelligence aside Hassan Rouhani the president of the dictatorship ruling Iran

On April 19th, Mullah Mahmoud Alavi, the regime’s Minister of Intelligence, made an appearance at Friday prayers in Tehran in which he attempted to raise morale of the country’s military forces in light of the recent designation of the Islamic Revolutionary Guards Corps (IRGC) as a Foreign Terrorist Organization (FTO) by the United States. The designation carries significant economic and political consequences for a regime that is already facing crises from all sides.

Alavi focused his remarks on the regime’s suppression of the MEK during the last year in the Iranian calendar (March 21, 2018 to March 20, 2019), saying that during this time “116 teams related to the PMOI [MEK] have been dealt with.” He confusingly referred to these suppressive acts as “intelligence epic” and said that the ministry’s actions were due to “major national security reviews in light of Khamenei’s breakthrough guidelines.”

Call for the release of the arrested and sending an international delegation to meet them#Iran #HumanRightshttps://t.co/wPYVVBUS4O pic.twitter.com/KAURYVX9av

Alavi insisted that these achievements were carried out through Khamenei’s tailoring and said that the details of the suppressive acts should be shared with the public through “national media.” The regime’s state-run media have become widely distrusted by the Iranian people, who view the mullahs’ news agencies as propaganda. It is common for protesters to chant, “Our shame, our shame, our radio, and TV!” Regime leaders have expressed frustration at their inability to stop people from turning to the Internet and social media for unfiltered news.

The Minister of Intelligence has not officially released the true number of MEK members arrested during the last Iranian calendar year. He intentionally omitted arrests made by the regime’s other suppressive agencies, such as the

Alavi’s choice to focus on the MEK is in keeping with the regime’s strategy of placing the blame for the FTO designation or IRGC on the resistance organization.

Regime must publish the names of all detainees and respect their rights consistent with International law.#Iran #HumanRights

After Alavi’s Remarks on Friday, Mrs. Maryam Rajavi, President-elect of the National Council of Resistance of Iran (NCRI), released a statement calling for the immediate release of MEK political prisoners in Oran. She called on the Secretary-General of the United Nations, the High Commissioner and the Human Rights Council of the United Nations, and international human rights organizations to form delegations to visit the regime’s prisons and meet with the prisoners and to take immediate action to secure their release. She emphasized that the prisoners are subject to torture and execution. Mrs. Rajavi further demanded that the regime publish the names of all of those who have been arrested and honor their rights in accordance with the international conventions it has adopted.