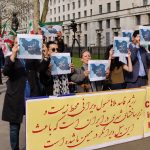 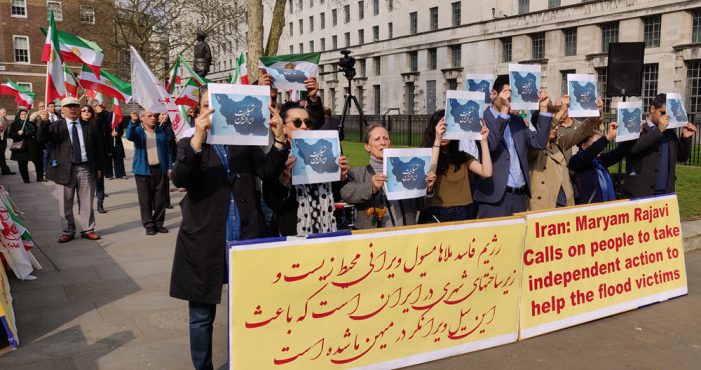 MEK supporters in London, demonstrate regime’s inaction regarding the flash-flood.

Supporters of the MEK, across the world, have been expressing their solidarity with the flood victims in Iran. On Saturday, March 30, protestors gathered in London outside the UK Prime Minister’s residence, Number 10 Downing Street. The protestors expressed their sympathy and condolences with their compatriots in Iran.

Members of the Anglo-Iranian Communities and supporters of the #NCRI & #MEK expressed solidarity with the flood victims in Iran at a rally outside Number 10 Downing Street in London on 30 March 2019.#IranFloods #IRANFLOOD@USAdarFarsi @StateDept https://t.co/dKwZxacX4f pic.twitter.com/l9rejqBxFH

They also expressed their anger and frustration at the regime’s response to the disaster. The People’s Mujahedin Organisation of Iran (MEK) revealed that the regime has deliberately misled the public over the death toll caused by the flooding.

Heavy rain and extreme weather have caused widespread flooding across 25 of Iran’s 31 provinces. Roads, buildings, cars and tragically, people, have been washed away in flooding in Shiraz, Khorramabad, and Isfahan.

However, the regime’s response has been muted. Instead of mobilizing the country’s resources to organize coordinated rescue efforts, the regime has attempted to deflect blame. The MEK’s President-elect Maryam Rajavi drew attention to the regime’s role in exacerbating the flooding. In a statement, she said, “they destroyed the channel that used to lead floodwaters out.” During heavy rain, this led to extensive flooding in Shiraz.

The regime deployed the Revolutionary Guards (IRGC) and the Basij forces, but instead of helping victims, they were quelling protests, demonstrating that even in a time of national crisis, the regime will put its interest ahead of those of ordinary Iranians.

Maryam Rajavi summed up the situation in another statement. “The disaster once again proved that the ruling mullahs’40-year policy of plunder and pillage has taken a heavy toll on the lives and livelihood of our people,” she said.

The leader of the Iranian opposition went on to call for cooperation among Iranian civilians. “The only way and the best way is that we help one another,” she said, adding, “no other power is more effective and more accessible than the power of solidarity among us.”

In addition to refusing to devote adequate resources to the rescue efforts, the clerical regime has deliberately hidden the full death toll from the public. The MEK believes more than 200 Iranian lives were claimed by the catastrophe. “The delay and procrastination in helping those who are besieged by the flood have increased the number of victims,” Hossein Abedini of the National Council of Resistance of Iran (NCRI), the umbrella group of the MEK, asserted.

Speaking to the rally of Anglo-Iranian communities & NCRI supporters outside Nr10 Downing Street, @HoAbedini stresses that #Iran regime is hiding the real number of victims who have lost their lives & blame the disaster on one another instead of providing relief #40YearsOfFailure pic.twitter.com/qnt1sR9Jbg

In hiding the full extent of the crisis, the regime has prevented international aid agencies from offering sufficient assistance.

In their protest on Saturday, the Anglo-Iranian community outside Downing Street called on the UK government to condemn the regime’s response to the crisis and work with the European Union to pressure the regime to provide disaster relief to the affected areas.

Malcolm Fowler, fmr member of Law Society #HumanRights Council, speaking at the rally of Anglo-#Iran'ians & NCRI supporters outside Nr10 Downing Street: the neglect & deceptions of Iran's regime over the catastrophic floods are characteristic of their disregards & oppression pic.twitter.com/Xo1BUaDcFm

Malcolm Fowler, a solicitor and former member of the Human Rights Committee of the Law Society of England and Wales addressed the protestors. He said, “the neglect and deceptions of the Iranian regime over the catastrophic floods and landslides are characteristic of its disregard and oppression of all dissidents. Mrs. May’s Government must now take them to a task.”

Several other prominent UK lawyers also spoke at the rally, expressing their solidarity with the Iranian victims and calling for a more “responsible” government.