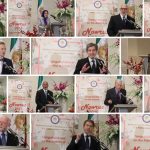 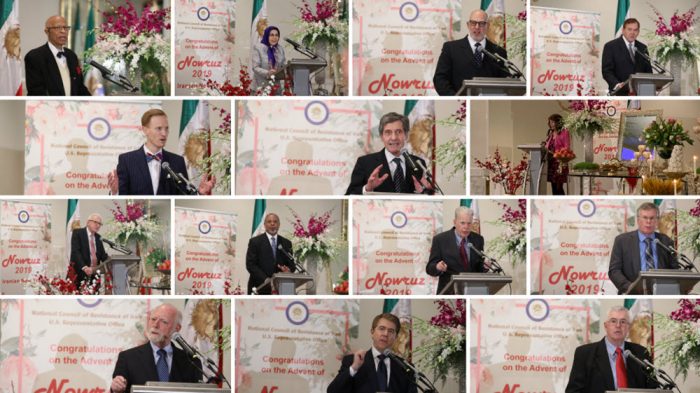 Former US lawmakers, and US officials speak at NCRI’s Nowruz ceremony in Washington D.C.

The US representative office of the National Council of Resistance of Iran (NCRI), celebrated Iranian New Year (Nowruz) by hosting a dinner reception. The event, held in Washington D.C. on March 22, featured several prominent former US officials who spoke at length on the threat the Iranian regime poses to international peace, stability and human rights.

All of those that took the floor took the opportunity to call for a firm stance from the US government towards the Iranian threat. But among the calls for firm action were hopeful messages. Dr. Sofey Saidi of the NCRI Foreign Affairs Committee opened the evening with a speech full of optimism.

A number of prominent speakers addressed the gathering of young and old at the NCRI-US Nowruz dinner receprtion, against the backdrop of an elaborate Haft Seen, a traditional symbol of the ancient Persian Nowruz festivities. #Iran #Nowruz https://t.co/J91DRFWGCn pic.twitter.com/Vt7zmZI5pp

She outlined how 2019 is set to be a strong year for the pro-democratic opposition in Iran. The NCRI and its main member, the People’s Mujahedin Organisation of Iran (MEK) are making huge strides within Iran. Its resistance units in Iranian towns and cities have mobilized the disenfranchised Iranian population. Iran’s citizens are protesting the mullahs’ tyranny in streets across Iran on an almost daily basis. The fall of the mullahs is “inevitable,” Saidi said.

When Tom Ridge, the former Secretary of Homeland Security, took the floor, he condemned the regimes unlawful arrests of more than 10,000 people across 160 Iranian towns and cities. “The people in their own way are saying that the situation is unacceptable and they want change,” he said.

A former US ambassador to the United Nations Human Rights Commission, Kenneth Blackwell, spoke of the “new burst and a new energy and a new yearning for freedom in the country.”

The Only Viable Alternative to the Mullahs

The speakers also all echoed the same conviction that Iran’s rejection of the religious fascism instilled by the clerical regime must be replaced with the democratic values outlined in the MEK and Maryam Rajavi’s ten-point plan.

The U.S. Representative Office of the National Council of Resistance of Iran (NCRI-US) celebrated the Iranian New Year, Nowruz, with a dinner reception at the historic Mayflower Hotel in Washington, DC on March 22nd. #Iran #NowRuz pic.twitter.com/GtFEh2kL5P

Robert Joseph said, “the ten-point plan of the MEK and the NCRI, I think, point the way to freedom and point the way to bringing that light to take away the darkeness.” “The rebirth of the great Persian nation is at hand,” he said, concluding, “the goal that so many of you have sought for so many years is reachable… the inevitable result is a free Iran.”