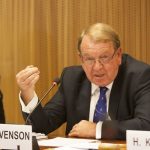 Struan Stevenson: “The Time is Right For the EU to Follow America’s Example” 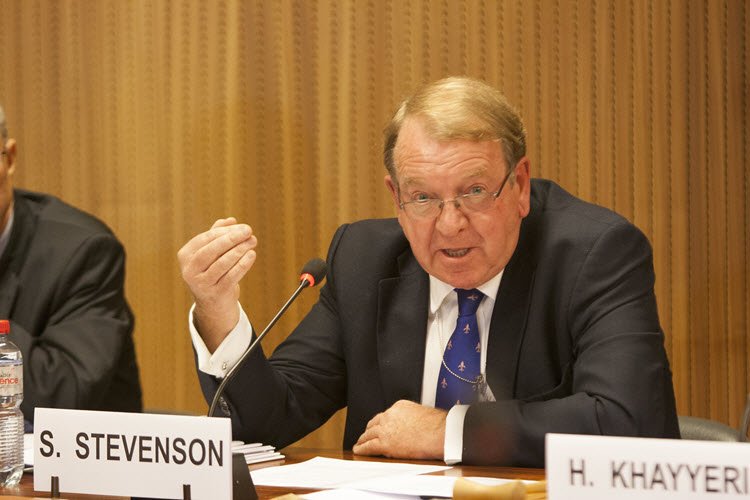 Archive Photo-Struan Stevenson, addressing a symposium at the European headquarter of the United Nations, on the situation of human rights in Iran after the uprising in last December-March 2018

In Mr. Stevenson’s most recent op-ed, he calls time on appeasement and advocates a tougher stance towards the Iranian regime. Writing for UPI, Stevenson says, “it is time for the EU to pull out of the nuclear deal with the Islamic Republic of Iran.”

As a former Scottish Member of the European Parliament and coordinator of the Campaign for Iran Change, Struan Stevenson is well-versed in the decades-old policy of appeasement Western governments have long adopted towards the Iranian government.

Pro-democratic campaigners have often criticized the deal, which led to the release of $150 billion in frozen assets and saw the lifting of economic sanctions against the clerical regime.

This money, Stevenson argues, enabled the theocratic state to redouble its funding of Hezbollah in Lebanon, the Houthi rebels in Yemen, Bashar al-Assad in Syria and the brutal Shi’ia militants in Iraq, etc.

Under president Trump, the US government has recognized the deep flaws in the agreement. Secretary of State Mike Pompeo called it, “a failed strategic bet that fell short of protecting the American people or our allies from the potential of an Iranian nuclear weapon.” He described how “Iran’s destabilizing behavior has grown bolder under the deal” and asked, “every nation who is sick and tired of the Islamic Republic’s destructive behavior to join our pressure campaign.”

The United State’s “pressure campaign” has seen the withdrawal from the JCPOA nuclear deal and the reintroduction of economic sanctions against the Iranian regime. However, Europe has as of yet been reluctant to follow suit.

A Campaign of Terror on European Soil

Europe’s inaction has occurred despite a bloody and ruthless campaign of state-sponsored terror that the Iranian regime has launched on European soil. 2018 saw a string of terror incidents plotted by Iranian regime agents on European soil, the most serious of which saw a Belgian-Iranian couple carry 500 grams of improvised explosives and a detonator to Paris in an attempt to attack members of the Iranian opposition group, the People’s Mujahedin Organisation of Iran (MEK), and their allies.

“Similar terror plots were uncovered in Albania, where Iran’s newly appointed ambassador and first secretary were found to be leading Ministry of Intelligence and Security (MOIS) agents,” Stevenson writes.

MEK members in Europe have been subject to a spate of regime-orchestrated planned terror attacks, indicating a complete lack of respect for the sovereign rights of European nations and total disregard for the safety of European citizens.

“despite clear evidence that Iranian embassies in Europe were being used as terrorist bomb factories, EU lawmakers on July 5… approved plans for the European Investment Bank to do business with the ruling theocracy in Iran.”

No gesture better encapsulates Europe’s dedication to appeasement than this. However, there are signs of cooling attitudes towards the Iranian regime.

Diplomats from France, the UK, Germany, Denmark, and the Netherlands held a meeting in Tehran in early January. They reportedly informed senior members of the Iranian leadership that the EU could not tolerate sustained ballistic missile testing and assassination attempts on European soil.

The meeting did not go well. According to Stevenson, Iranian officials stormed out of the room and slammed the door.

Stevenson concludes, “clearly the mullahs are deeply perplexed. A state of total confusion has persisted ever since Trump tore up the nuclear deal and re-imposed tough sanctions.” He added, “the time is right for the EU to follow America’s example and pull the plug on the nuclear deal.”