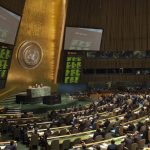 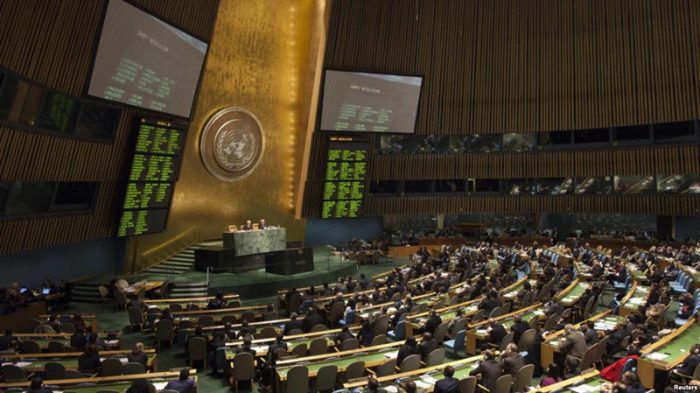 The UN General Assembly condemned the gross violations of human rights in Iran for the 65th time in the row- December 17, 2018

In a landmark moment for Iran, the UN Security Council voted to adopt a resolution condemning human rights abuses carried out by the Iranian regime. The pivotal vote saw 84 votes in favor of the motion, while 30 voted against it. There were 67 abstentions.  \

Of particular concern to the UN Security Council, was the Iranian regime’s high number of executions, including its application in cases where the alleged perpetrator committed the crime as a juvenile, before the age of 18.

The UN also cited, “the widespread and systematic use of arbitrary detention”, appalling prison conditions, and “cases of suspicious deaths in custody”.

The UN also called on Iran to end its discrimination of women, and its “severe limitations and restrictions on the right to freedom of thought, conscience, religion or belief”.

The resolution highlights the persecution and violence carried out against Sufi Muslims, Christians, Jews, Sunni Muslims, and members of the Baha’I faith within Iran.

A Victory for the Iranian Opposition

Iranian opposition and the People’s Mojahedin Organisation of Iran (MEK) welcomed the resolution.

The president-elect of the Iranian opposition, Mrs. Maryam Rajavi said in a statement that the resolution, “once again confirmed that the regime blatantly tramples upon the Iranian people’s most fundamental rights in all political, social and economic spheres”. She added that the regime is “in no way congruous with the 21st century and must be isolated by the world community”.

The resolution is not all-encompassing, and it fails to address several aspects of the regime’s brutal oppression and persecution campaigns, however, it may suggest a departure with the international community’s decades-long position of inaction which has emboldened the mullahs and allowed human rights abuses to continue unchallenged.

Justice for the 1988 Massacre

One area which the MEK and the Iranian public has been calling for acknowledgment and an investigation into the regime’s conduct is in the 1988 massacres.

In the summer of 1988, the regime executed more than 30,000 political dissidents, burying them in secret mass graves. Many of the perpetrators and murderers still hold senior positions in the Iranian regime.

The UN Must Investigate the 1988 Massacre

Following a recent report from Amnesty International which condemned the regime for its deplorable and despicable actions in 1988, and the persistence coverup since, many Iranians are calling for a UN investigation into the crimes and for those responsible to be brought to justice for their crimes against humanity.

Maryam Rajavi mentioned the 1988 massacre in her statement. She called it, “one of the most obvious examples of crimes against humanity after the Second World War”.

She asserted that the international silence following the atrocities has allowed the regime to carry out “more brutal violations of human rights”, and “assured them [the mullahs] that their crimes in other parts of the world will go unanswered”.

The president-elect concluded, “the international community should investigate the crimes of this regime, especially the 1988 massacre, and refer the dossier of these crimes to the UN Security Council”, adding, “this is not only the right of the Iranian people but also a prerequisite for peace and the fight against terrorism”.