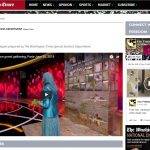 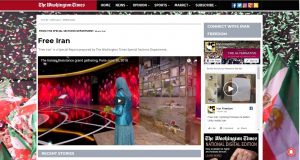 July 21st marks the 37th anniversary of the 1981 founding of the National Council of Resistance of Iran (NCRI). This month, the Washington Times published a special section on its website about the NCRI annual Grand Gathering, which took place on June 30, 2018, in Paris. This year’s gathering, titled “Free Iran: The Alternative,” was attended by over 100,000 people, including members of the Iranian Resistance movement, specifically the MEK and the NCRI; dignitaries; diplomats; and politicians from all over the world.

The Grand Gathering included dozens of speeches from these well-known leaders from across the political spectrum offering their perspectives on the NCRI and the MEK as the only viable alternative to the clerical regime currently in power in Iran. The timely series on the Free Iran event by the Washington Times included quotes from many of these speeches.

Mrs. Maryam Rajavi, President-elect of the NCRI, gave the keynote address at the gathering, opening her speech by saying, “[T]he flames of the auspicious and liberating uprising are again rising in Tehran and across Iran.” She praised MEK members who have recently resettled in Albania, challenged anyone who felt they could topple the regime without a plan to do so and outlined her plan for a peaceful transition to a democracy after the fall of the clerical regime.

"If one can leapfrog a 50-year history overnight and create real change in Iran while dreaming about foreign support, we say: Go ahead, the ball is in your court." @Maryam_Rajavi #FreeIran2018 https://t.co/IcfHHtJyKn

“You’ve got an alternative that’s built on a solid foundation of 10 principles. Democracy, human rights, a non-nuclear Iran, separation of church and state, and the rights of women and of all minorities to be protected. My goodness, that sounds like a full-fledged democracy. That’s what the NCRI stands for. That’s what Madame Rajavi stands for, and that’s what your martyrs died for.”

Former New Mexico Governor Bill Richardson spoke directly to the Iranian Resistance: “You are the source of change in Iran. The young people, the women, the resistance, the youth, the young people here. And I want to tell you a lot of people ask, ‘Is there an alternative to the mullahs, to the dictatorship?’ And the answer is, Yes, it’s the resistance. It’s the MEK. It’s Mrs. Rajavi. But it’s you…the power is with you. The power is with everyone in this room and each one of you represents thousands in Iran that are saying, ‘No dictatorship.’ The end is near. The end is near.”

Former U.S. Attorney General Michael Mukasey used his time to speak about the weakness of the regime, saying, “Finally the stars seem to be aligned to accomplish what we all want to accomplish, which is the downfall of the mullahs’ regime.”

Retired U.S. General George Casey spoke about the ruling regime in Iran and the need for a democratic alternative: “Iran, through its terrorists on the Quds Force, continues to support terrorism and destabilize not only its neighbors but the entire region, and that’s not normal behavior. And I firmly believe that no government that actively imports and exports terror can be a productive player in the world today. Change must come to Iran.”

Former FBI Director Louis Freeh spoke first to the Freedom Fighters in Iran, saying: “We support you, we’re there for you, we can move.”

Frances Townsend, the former Homeland Security Advisor, addressed the women of the Iranian Resistance: “You are the roses of the future that will lead us to a free Iran.”

A large bipartisan delegation of U.S. Congressmen and women sent letters of support to the NCRI. Among them was House Minority Leader Nancy Pelosi, who wrote: “This year, the world has watched men and women bravely stand up for their rights in peaceful protests across the country. Their courage and determination inspire all to recommit to our shared mission, to build a democratic, free and non-nuclear Iran. America stands in solidarity with every Iranian man and woman and child as they fight for the right to speak freely without fear of persecution.”

Dr. Bernard Kouchner, former French Minister of Foreign Affairs and founder of Medecins Sans Frontieres offered this advice for the Iranian Resistance: “Be brave and clear in offering freedom and democracy. The French are with you.”

Martin Patzelt, member of the German Bundestag from the Ruling Christian Democratic Party, praised the Iranian Resistance movement: “It is very well organized and is in a position to bring together all those discontented and freedom-lovers who are still not organized.”

Former Canadian Prime Minister and Chairman of the International Democrat Union Stephen Harper expressed the support of the international community for the Iranian people. “You have many friends, as today’s gathering shows, from all around the world, who want a new Iran. An Iran governed not by the hatreds of the past, but by the people’s aspirations for their future. Keep up the fight.”

Sir David Amess spoke on behalf of a huge delegation of over 50 British Members of Parliament from both the House of Lords and House of Commons and from all political affiliations. “Madame Rajavi, dear friends, we are here to say we stand with you and the Iranian people as you strive for a better future. And we will continue to support you until Iran is free,” he said.

U.K. Member of Parliament Theresa Villiers spoke of her hope for the future for Iran’s brave women: “Let us all hope that one day Mrs. Rajavi is able to put into effect her 10-point plan, and finally we will see an Iran that is free of the brutal repression of the mullahs, free of the cruelty and human rights abuse to which it’s been subjected for far too long, and free at last to pursue a democratic future where men and women have an equal chance to follow their dreams, make their own choices, and succeed in whichever field of life they want to.”

Former Senator from the Republic of Colombia Ingrid Betancourt spoke of Maryam Rajavi’s success in organizing the resistance: “Maryam Rajavi’s determination has brought this thousand Ashrafs to life inside Iran. But it is the courage, the sacrifice paid with blood, and the love of those who are fighting in the streets in all the provinces, in all the capitals, and also in Tehran, that will bring this uprising to victory.”

Former Albanian Prime Minister Pandeli Majko, who also served as Defense Minister and a Member of Parliament in Albania, where thousands of MEK members are currently living in exile, said this about Albania’s decision to provide refuge for the resistance members:“[O]ur choice is to help you. And this is the reason that 3,000 Iranians are sheltered in Albania. They are in our faith, and Albanian faith is a word large, like world. We are waiting to see you soon back in Tehran.”