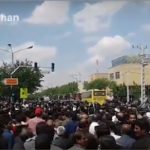 Protests Continue to Rage Across Isfahan and Beyond 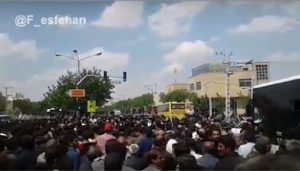 Protests Continue to Rage Across Isfahan and Beyond

Last week’s protests continue to rage in Isfahan province. Protestors from all walks of life took to the streets and demonstrated from Khorasgan Square, Jay Street and Ahmadabad Square in Isfahan.

The protestors gathered in overwhelming numbers, women vented their frustrations with the crowd, the nation’s youth protested for a brighter future, and farmers took up their shovels and chanted with their fellow compatriots.

The noise was rousing. Chants of “Rouhani the liar” and “shameless authorities, they are thirsty for the blood of the nation,” rang out across the province in a chorus of defiance against the repressive Iranian regime.

What ignited the protests?

Hundreds of farmers have complained about the lack of water available. Their livelihoods are under threat as drought racks the Iranian agricultural sector. What water is available, is denied to the farmers. The corruption and mismanagement of water resources from the Iranian regime have exacerbated the problem and left many rural communities without water for their crops.

Government officials are taking bribes in exchange for diverting water sources to neighboring regions. In Isfahan province, its main river has seen its flow diverted to neighboring Yazd province, leaving the region dry and the citizens unable to grow their crops.

The regime is trying to curb the spread of dissent

As the protests spread and more citizens took to the streets, inspired by the farmer’s courage and relishing the opportunity to vent their frustrations with the Iranian regime, the authorities attempted to block their path to the farmers. They erected barriers and parked cars to stop the magnitude of protestors from swelling.

However, there is little the regime can do to delay the inevitable. The determination of the brave farmers in Isfahan quickly inspired others to mount their own protests. In Tehran, Rasht, Ahvaz, Mashhad, Kerman and Ardebil, members of the cities institutions that have seen their finances looted by the regime joined the civil unrest sweeping across the country.

The leader of Iran’s opposition (MEK), Maryam Rajavi, praised the farmers of Isfahan for their perseverance and determination. She also expressed solidarity with the urban population’s dissent.

Maryam Rajavi said, “hail to my fellow Iranians in Tehran, Mashhad, Rasht, Ahwaz, Kerman, Koohdasht, and Pars Abad Moghan, who staged demonstrations in protest against their assets being looted by institutions affiliated with the Iranian regime.”

The only way to bring an end to the Iranian regime’s tyranny is to show Rouhani and the world that the Iranian people stand in opposition to the regime. Maryam Rajavi and all those in opposition must stand together in the face of adversity. Like the farmers in Isfahan province, we must demonstrate that our determination is unwavering, and our perseverance to regime change is limitless.