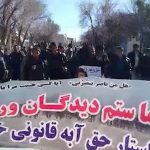 Isfahan’s Farmers Show They Will not be Silenced 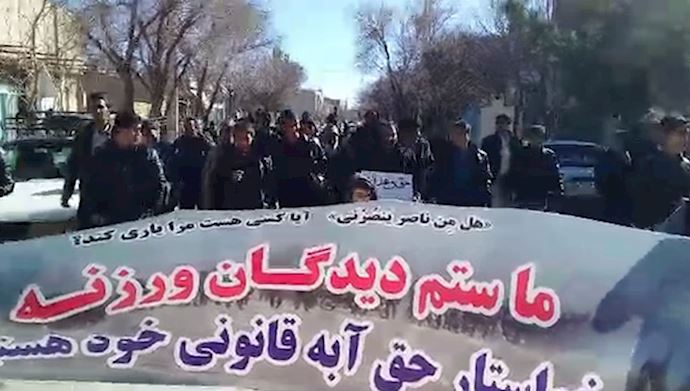 The protest against water shortages in Isfahan continues-January 2019

With sights that conjure up scenes from earlier in 2018, farmers from Isfahan province and villages and towns surrounding the Zayandeh Rud River have been making their voices heard in protests on the streets of Isfahan City.

Reports from MEK sources inside Iran indicate that the farmers have been traveling into the city to take part in vast protests over the last few days, as they have at several points in 2018, in protest of the regime’s rampant abuse of their water rights.

Regime water mismanagement has left the farmers without enough water to cultivate their crops. Despite officials making several promises to address the situation, there has been no resolution to the farmers’ drought problem.

#Isfahan farmers hold demonstrations, chant “death to Rouhani”
On Friday, the farmers of Varzaneh, east Isfahan, returned to the Darvazeh Dolat square to hold demonstrations in protest to the government’s policies that have resulted in… https://t.co/RFutjg79vG #IranProtests pic.twitter.com/Ybbut7xEOJ

However, the news network deliberately avoided all mention of the farmers’ loud chants of “death to the dictator”.

In the face of economic ruin and starvation, the farmers’ protests have been intensifying in recent weeks. Clashes between the farmers and the Iranian regime security forces have become even more common, often resulting in the death of a number of protestors.

Hassam Kamran, a representative of Isfahan sitting in the Iranian Parliament, decried the situation in his home province. “Why are you doing this?”, he asked the regime, “the other day, eight of their people [protestors] were killed. Anything that happens in the future will be laid at the feet of [parliament speaker Ali] Larijani and the government.”

Iran – Isfahan
Continuing the demonstrations of farmers in Warzna Isfahan with all their strength in protest against the policies of the mullahs' regime chanting slogans: Greetings to the farmer .. Death to the ungrateful !! We stand and get our rights ..
Friday 4 January 2019 pic.twitter.com/pIDIrzz0At

The government has attempted to frame the death of the protestors and the ongoing clashes as a security issue, however, the Iranian people know better. A group of hungry farmers on the brink of economic ruin are not a security issue. They are a population that has seen their basic human rights deprived by the repressive regime in power.

Even Kamran himself has been guilty of abusing the hardworking farmers of Isfahan. He was involved in the arbitrary plunder and the destructive policies that created this mess. But now, sensing the regime’s days are numbered, he is working tirelessly to distance himself from the atrocious policies and side with the swelling tide of protestors.

The Farmers of Isfahan are not Alone

The mullahs’ destructive and dangerous policies have left other farmers with water shortages. Farmers in Khuzestan, Charmahal Bakhtiari and many other provinces have reported crop failures due to insufficient water access.

#Isfahan farmers’ cries for their rights can be heard from Khajou Bridge despite repressive measures and the arrests of a number of them. I hail the protesting farmers and call on all youths to support them. #IranProtests #Iran

The problem stems from the regime’s dam-building operations that have diverted the flow of water away from the agricultural heartlands.

The farmers know this and are determined to show the regime the effects of their handiwork. They shout slogans like, “farmers will die but won’t give in to disgrace” and have turned their back during Friday prayers.

The brave farmers are showing the mullahs, much like many other segments of the Iranian workforce, that they will not tolerate the systematic abuses that have been carried out by the regime’s corruption and mismanagement. This rage is bubbling below the surface across the Iranian workforce, but it is begging to break out. The consequences will be nothing short of catastrophic for the clerical regime.