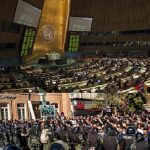 Written by Esmail Mohades on December 20, 2019. Posted in NEWS 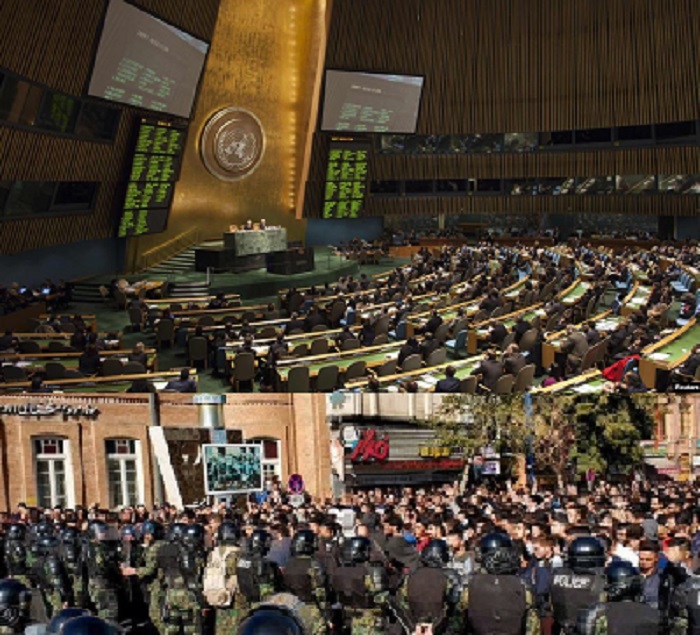 On 18 December 2019, the UN adopted the 66th resolution about the gross violation of human rights in Iran.

The resolution passed with a vote of 81 to 30 and 70 abstentions. The draft resolution proposed by Canada had been approved by the Third Committee of the General Assembly on November 14.

Maryam Rajavi: Iran’s ruling theocracy must be isolated by the world community, its dossiers referred to the UN Security Council, and its leaders face justice for crimes against humanity

Mrs. Maryam Rajavi, President-elect of the National Council of Resistance of Iran, welcomed the U.N. resolution.

“Condemning the systematic and gross violations of human rights by the theocratic regime ruling Iran, the UN resolution once again confirmed that the regime blatantly tramples upon the Iranian people’s most fundamental rights in all political, social and economic spheres,” she said.

Mrs. Rajavi added that “the Iranian regime is in no way congruous with the 21st century and must be isolated by the world community.”

The U.N. resolution referred to a number of issues that are well-known to the MEK and have been written about on this site before, including the “alarmingly high frequency” of the regime’s use of the death penalty against minors, “the widespread and systematic use of arbitrary detention,” prison officials “deliberately denying prisoners access to adequate medical treatment,” and “cases of suspicious deaths in custody.”

The Iranian regime is responsible for half of the world’s executions. It censors information going in and out of the country, in an attempt to control its citizens and prevent the international community from knowing the full extent of the mullahs’ crimes. The regime frequently denies legal representation to ethnic and religious minorities, and it detains and imprisons peaceful protesters for speaking out against the regime. International human rights groups have repeatedly intervened on behalf of Iranian prisoners who were denied due process and basic human rights. The mullahs have ignored all of these pleas and every act of censure and condemnation.

In her statement about the 65th Resolution, Mrs. Rajavi spoke about the Iranian regime’s mass execution of 30,000 political prisoners in the summer of 1988. The murders of these men and women, who were mostly MEK members or supporters, remain unpunished to this day.

Mrs. Rajavi said, “The most vivid example of grave violations of human rights in Iran is the 1988 massacre of political prisoners perpetrated by the regime’s key institutions and leaders, who are still in power, still defend this crime, and remain immune from punishment. The world community faces a monumental test in investigating and prosecuting those responsible for this great crime against humanity.”