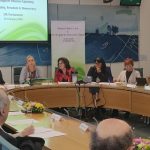 Written by Jennifer Jones-Kelley on February 26, 2020. Posted in NEWS

On the occasion of the International Women’s Day, a conference was held at the UK Houses of the Parliament, supporting the Iranian protests and the leadership of the President-elect, Maryam Rajvai

On Wednesday, a cross-party group of MPs from both houses of the British Parliament held a conference on women’s rights in Iran. The conference was scheduled in advance of International Women’s Day and focused on the regime’s oppression of women and the need to support the MEK and the Iranian people in their struggle for a free and democratic Iran. Ms. Douwlat Nouwrouzi, the UK Representative of the National Council of Resistance of Iran (NCRI) live-tweeted the event.