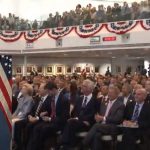 Pompeo to Iranian Resistance: The  United States Supports You 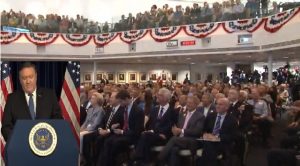 The U.S. Secretary of State, Michael Pompeo addresses the Iranian American community outlining the US policy on Iran.

On Sunday, July 22, 2018, U.S. Secretary of State Mike Pompeo addressed a large group of Iranian American citizens at the  Ronald Reagan Presidential Foundation and Library in a speech aimed at supporting Iranian voices.

In his speech, Secretary Pompeo expressed concerns about the Iranian regime’s attempt to bomb the MEK rally on June 30th, 2018. He said, “earlier this month an Iranian diplomat based in Vienna was arrested and charged with supplying explosives for a terrorist bomb, scheduled to bomb a political rally in France. This tells you everything you need to know about the regime. The regime and its allies in terror have left a trail of dissident blood across Europe and the Middle East.”

.@SecPompeo: At the same time #Iran’s regime is trying to convince Europe to stay in the nuclear deal, they’re covertly plotting terrorist attacks in the heart of Europe. pic.twitter.com/qDFFA1wsEP

” Indeed, our European allies are not immune to the threat of the regime by terrorism. At the same time [the Iranian regime officials]are trying to convince Europe to stay in the nuclear deal, they are covertly plotting terrorist attacks in the heart of Europe,” emphasized Secretary Pompeo.

On June 30th, a Belgian couple of Iranian heritage was arrested with explosives and arrested for attempting to bomb the annual Grand Gathering of the Iranian Resistance in Paris. An Iranian diplomat was arrested in Germany for masterminding the attack. Secretary Pompeo tweeted about this story as well, urging all of the Iranian regime’s diplomats to be expelled.

Secretary Pompeo’s speech on Sunday was an extension of the previous support he has shown for the Iranian protesters and their struggle for change and a free Iran.

The Trump Administration withdrew from the Iran nuclear deal earlier this year and will reimpose sanctions in September, ending the U.S. policy of appeasement with the mullahs.

In his speech on Sunday, Secretary Pompeo said:“This is why we also call on all governments to end their flirtations with the regime and come quickly to the aid of the Iranian people.”

Pompeo scoffed at the idea that anyone in the regime’s government could be called a moderate, saying in his speech:

“The regime’s willingness to commit violent acts haven’t produced anyone to lead Iran that can be remotely called a moderate, or a statesman. Some believe that President Rouhani and foreign minister Zarif are moderates. The truth is, they are merely polished front men for the Ayatollah’s international con-artistry. Their nuclear deal didn’t make them moderates, it made them wolves in sheep’s clothing.”

He further added: “The regime cannot endure any ideas in society that would contradict or undermine them. That is why the regime has for decades heartlessly repressed its own people’s human rights, dignity, and fundamental freedoms.”

The regime is well-known for its smear campaign to demonize, discredit, and violently discredit the MEK, the largest opposition to its clerical regime.

Secretary Pompeo said: “The level of corruption and wealth among regime leaders shows that Iran is run by something that resembles the mafia more than a government.
Despite the regime’s clear record of discretion, America and other countries have spent years straining to identify a political moderate; it’s like an Iranian unicorn!”

Secretary Pompeo’s tweets speak loudly about his feelings about the regime as well. From  Pompeo’s tweets: “We are asking every nation who is sick and tired of the Islamic Republic’s destructive behavior to join our pressure campaign. This especially goes for our allies in the Middle East and Europe, people who have themselves been terrorized by the violent regime’s activity for decades.”

“40 years of fruit from Iran’s Islamic Revolution has been bitter. 40 years of kleptocracy. 40 years of the people’s wealth squandered on terrorism. 40 years of Iranians jailed for expressing their rights.”

“Last January the regime welcomed the New Year with the arrest of 5000 of its own people; they were peacefully calling for a better life. Hundreds reportedly remain behind bars and several are dead at the hands of its own government; the leaders cynically call it suicide.”

Secretary Pompeo referring to the uprising that has been taking place among the people of Iran since December 2017, and the regime’s attempt to violently suppress protesters, said: “Since December Iranians have been taking to the streets in the most enduring and forceful protests since 1979. Some shout the slogan “the people are impoverished while the Mullahs live like Gods!” while others choose to shut down the Grand Bazaar in Tehran.
The specific grievances do differ but all those voicing dissatisfaction share one thing; they have been ill-treated by a revolutionary regime. Iranians want to be governed with dignity, accountability, and respect.”

In his speech on Sunday, he also emphasized: “Today, the United States condemns oppression levied on the Iranian people by those who rule unjustly, and we proudly amplify the voices of those in Iran longing to have those inalienable and universal human rights cease to be ignored and instead to be honored. We do so knowing that many in the streets and marketplaces speak for those who the regime has permanently silenced over the years – who may even have been loved ones who are in the audience tonight.”

.@SecPompeo: The United States condemns the oppression levied on the Iranian people by those who rule unjustly. pic.twitter.com/XKX7ziy6hr

He went on to say, “It’s America’s hope that the next 40 years of Iran’s history will not be marked by repression and fear – but with freedom and fulfillment – for the Iranian people.”